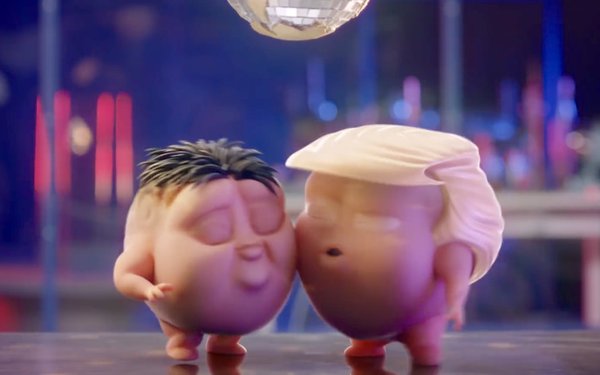 Most times, advertisers want to stay away from politics. It’s too messy. After the 2017 Super Bowl, some viewers called for a boycott of brands including Budweiser, 84 Lumber, Coca-Cola, Airbnb, Kia and Tiffany because of ads pro-Trump fans thought took a views on immigration or the environment.

It doesn’t take much to rile political true believers, regardless of the politics, so most marketers advise clients: Don’t go there.

A big exception might be a YouTube ad for new mattress company Nectar Sleep that parodies not only Trump but also makes fun of Russian President Vladimir Putin and Kim Jong-un, the Supreme Leader of North Korea, in a three-minute message, “Make America Sleep Again.”

A lab-coated “scientist” claims Nectar tested the brains of those world leaders after they had slept a while on Nectar bedding, and clinically verified that with a good night’s rest, all of their acrimonious brain waves became peace and lovey. The CGI-created brains have gotten 2.8 million views since March.

“We’ve received no complaints,” Craig Schmeizer, Nectar’s co-founder tells Marketing Daily in an email conversation. (He was in China where the mattresses are made.)

“We really did not orient “Make America Sleep Again” toward any particular political cast so as much as hope to create engagement by weaving in some current mainstream news themes,” he says. “We brought in some of the more recognizable global leaders because we felt they added great energy to the storytelling about the virtues of great sleep.”

But Nectar is not exactly advertising in the mainstream Super Bowl, where getting away with controversial content is part of the game. “We have very active social media pages, including Facebook, Twitter, and Instagram,” Schmeizer says. “We use targeted advertising across all platforms and leverage pre-roll on videos across the Internet as well.” Its other videos get hundreds of thousands of views, but “Make America Sleep Again” is a favorite.

On YouTube, in fact, most of the comments are accolades: “This is the best ad I have ever seen” or variants, are frequently offered. Only a few seem to have picked up much on the political leaders, including, “I have to say I like this commercial purely because it depicts a (thinly veiled) homosexual relationship between Kim Jong Un and Donald Trump, and I KNOW it'd piss both of them off.”

Many of the comments are directed at actor Jayson Wesley, who portrays the lab scientist (actually wearing a white bathrobe, not a lab coat in the ad). “Make America Sleep Again” is the witty work of Google’s creative team and the BlackBoard Agency.

Yet, it will have to go a long way toward approaching the popularity of a series of ads for Purple, another new mattress company, whose pseudo-scientific demonstration videos have grabbed over 500 million views.

Two brothers from Utah who started Purple in 2016 reaped a reported $850 million when they merged with Global Partner Acquisition Corp. just a little more than a year later. Obviously, their advertising, and the product, leaves an impression.

Last month, Nectar launched its  first national advertising campaign across radio and television with ‘Sleep Like a Baby,” In the video version, the company uses real customer testimonials recited with grown adult heads superimposed on babies’ bodies as they rest on a Nectar mattress. It also launched “Sweet Dreams Delivered,” which also aired nationally on radio and TV.

The company created an offshoot, called DreamCloud aimed at a more affluent customer and those who want a bed with springs. On current website ads,  a customer can have a Nectar foam queen-sized mattress on sale for  $670, with two pillows, free delivery and a one-year money-back guarantee that Schmeizer says is a deal competitors don’t match. A queen-sized DreamCloud runs $1,568 as of today and includes free delivery and set-up.

Meanwhile, Nectar is developing another brand for Europe and Asia and plans to have its products selling in eight countries by the end of the year. Schmeizer says in 2017, its first year, it had $55 million in revenues and expects $300 million this year.

For the previous 20 years, Schmeizer says he’s been busy helping to lead companies “across data-driven verticals” at HSBC,  New York Life Insurance and XM Sirius. He’s a big fan of a comfy bed. “I’ve been around the world in different industries,” he says. “I also love to ski, so a good night’s sleep is great for recovery.”