Study: Digital Startups Vs. 'NYT' In Revs Per Staffer 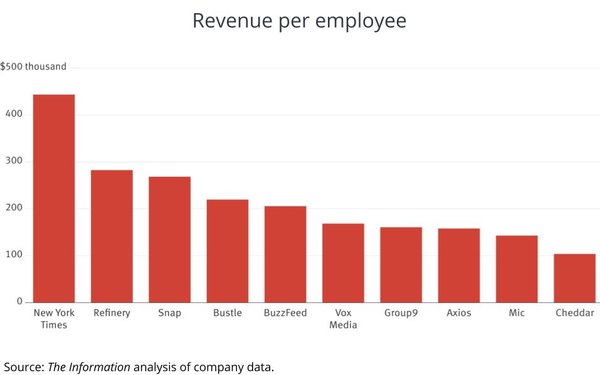 Digital media startups generated an average $180,000 of annual revenue per employee last year, according to a study of nine publishers by tech news site The Information.

The Informationstudied Refinery29, Snap, Bustle, BuzzFeed, Vox Media, Group9, Axios, Mic and Cheddar and compared the average annual revenue generated per employee with The New York Times Company, a legacy publisher. The data serves as a marker of the efficiency of a company’s operations.

Refinery29 and Bustle, which focus on lifestyle and culture for millennial women, generated much more than millennial-focused news site Mic, which brought in $143,000 per employee, the lowest of the group.

The Information notes that legacy publishers, like The New York Times Company, have a lot of costs, like printing a daily newspaper, which digital startups do not have.

Newer, fast-growing publishers may increase headcount as they build revenue. Axios, which drew in $157,000 revenue per employee, according to the study, was created just last year.

Axios had the fewest employees with 95, and of the start-up publishers, Snap had the highest with 3,069 employees.

It is also worth noting BuzzFeed, Vox and Mic had rounds of layoffs in recent months.

The pool of nine publishers is a small one, and comparing them to only The New York Times Company is an interesting choice for the study. However, it gives a peek at the efficiency of a few digitally native publishers and how much revenue is driven by teams, ranging from the thousands to the double-digits.

Cheddar had the smallest total total revenue of the group, at $11 million, of the startup publishers, Snap had the highest total revenue at $824 million.

The Information used revenue data and publicly disclosed details about employee numbers for the study. 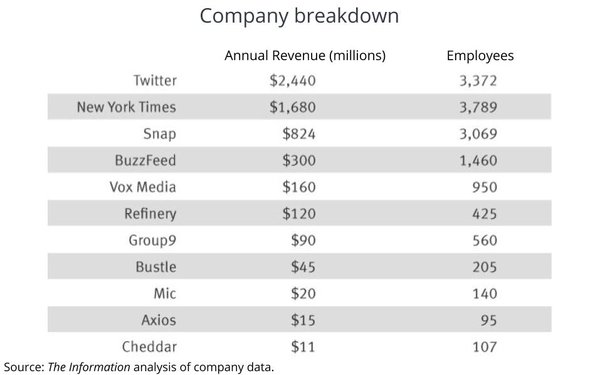