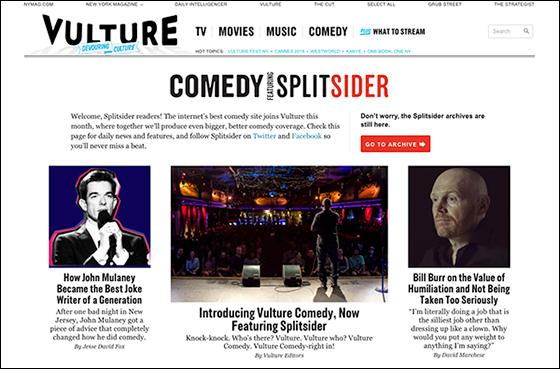 Vulture Comedy features content gathered from topics interesting to readers of Vulture and Splitsider, including profiles of well-known comics like Retta, popular episodes of Jesse David Fox’s Good One podcast, advice for budding comedians and a ranking of every Netflix comedy special.

Columns once found exclusively at Splitsider covering the best web videos of the week will run on the site. Twitter comedians and commentary on podcasts will also emerge on the channel, as will popular content from Splitsider.com.

Splitsider once called The Awl network home, along with popular sites The Awl, The Hairpin and The Billfold. In January, the media company announced it would shutter The Awl and The Hairpin, while The Billfold and Splitsider would remain in operation.

In March, New York announced it had acquired Splitsider for an undisclosed amount and would fold it into Vulture’s operations in May.

According to a report by Variety at the time of the acquisition, the rollout was meant to coincide with New York’s Vulture Festival, which took place May 19-20. To this point, Splitsider had continued to produce its own content.

Splitsider founder Adam Frucci stated at the time: “I’m confident that with [New York Media’s] vision and resources [Splitsider] will be cemented as a beautiful comedic oasis in the desiccated husk of the internet Mark Zuckerberg has left us all with.”