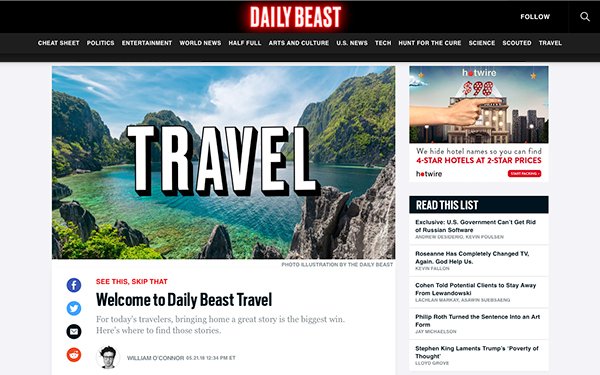 The new vertical is “part of a larger strategy to take  The Beast's unique brand of journalism and apply it to new coverage areas where it makes sense,” O'Connor told Publishers Daily.

"Our data consistently shows our loyal audience engages with our stories across all of our verticals," he added.

The Daily Beast launched a new vertical focused on science back in November. The Daily Beast found that the average time spent by readers on the Science channel is about seven minutes, compared to five minutes on the rest of the site.

“We continue to hear from our readers they want more Beast-style reporting in areas beyond politics and general news,” O'Connor said. “Travel was a natural extension for us, given our previous travel-related coverage has resonated so well.”

O'Connor believes there is a gap in the American travel journalism market.

The Daily Beast travel section will focus on gathering writers and photographers “of all sorts of ages, genders, races, orientations, backgrounds… to make sure we're speaking to those experiences in a way a lot of mainstream places don't,” O'Connor added.

Stories on the site range from “a former CIA officer in a wheelchair as she is carried around Machu Picchu” to “architecture of pre-Communist Bucharest.”

“In a time where luxury in travel means getting away from the crowds, we'll take readers to destinations they’ve never heard of and show new sides of places that have seemingly been instagrammed to death,” reads O'Connor's introductory post on the travel site.

O'Connor joined The Daily Beast in 2012.