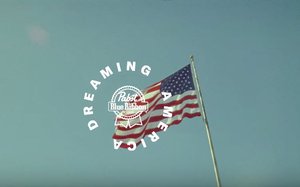 The beer brand — which points out that 43% of Millennials are multicultural, making them the most racially diverse adult generation in American history — has teamed with Vice to make two “documentaries” featuring young people talking about how they define “The American Dream.” The documentaries are meant to give young people a platform to express the continuing strength of the American Dream, says Pabst.

One of the long videos (below) has been released in time for Memorial Day weekend; the other will be released around the July 4 holiday.

Millennials featured in the videos include Niecee X, a poet and leader of the Black Women's Defense League; Subhi, a Syrian refugee; Erika, a police officer and veteran; Violet, a Texan drag queen; Mai, a Vietnamese farmer; and Outspoken Bean, a Houston poet.

The campaign also includes the creation of a nationwide “hotline” (1-833-Dream-On) that any U.S. consumer can call to record a voicemail that shares his/her dreams.

"The America Dreaming campaign is meant to be the start of an ongoing conversation with the next generation, to better understand what drives and motivates such a passionate and diverse group of Americans,” said Brandon Carr, brand manager for Pabst Blue Ribbon, which was founded in 1844.
beer, online video
Next story loading