Rise And Fall Of Roseanne Is Year's Top Story In Television 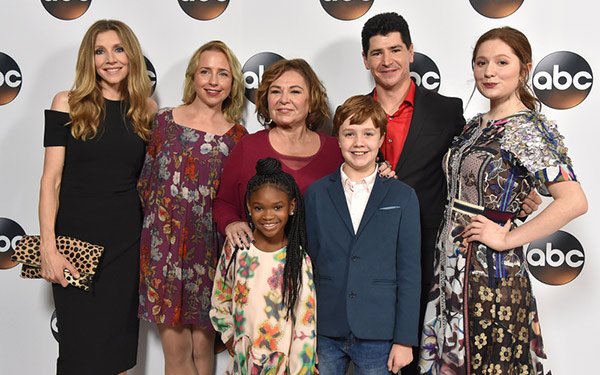 The story of Roseanne Barr was already the one most likely to seize the top spot in everybody's lists next December of the year's top stories in television.

Now, the stunning reversal of her fortunes makes this even more probable. Her sudden rise just two months ago -- like a Lazarus rising from the sitcom graveyard of the late 20th century -- was already the talk of the TV business.

Roseanne represented this season's most notable success story, and ABC was poised to make hay with her in the upfront selling season. Everyone was all smiles when she was the network’s lead-off personality at the upfront presentation held just two weeks ago (on May 15) at Lincoln Center in New York.

You know the drill: Her show was highlighted and praised so often during the presentation that it became a running joke among the other participants -- “Oh, have we mentioned ‘Roseanne’ enough here today?” Ha ha.

Then, no sooner does the season end than Roseanne herself dynamites the whole thing with a series of late-night tweets.

Hours later came one of the most terse emails from a network television publicity department that I have ever received. Subject line: “Statement by Channing Dungey, president, ABC Entertainment.”

This “news release” consisted of a statement totaling just 19 words: “Roseanne's Twitter statement is abhorrent, repugnant and inconsistent with our values, and we have decided to cancel her show.”

End of statement, end of show -- but not the end of the story. First, Roseanne quit Twitter. Then, when she saw how many people had tweeted their support of her, she unquit in order to retweet many of the tweets posted by supporters. (Her handle, then and now: @therealroseanne.)

As you can imagine, this didn't go over well, and became a target for derisive criticism in the all-knowing court of social media opinion.

And just as her revived show became a lightning rod for conversation on both the left- and right-leaning cable news talk shows when it premiered in March, her firing ignited a similar conversation on Tuesday night.

One of the threads in the conversations had conservatives wondering why this tweet would lead almost instantaneously to the cancellation of her show when other comedians have said far worse (in their opinion) about figures on the right without experiencing similar sanctions (or any).

Generally speaking, they might have a point, but in this particular instance, Dungey and Disney chief Robert Iger probably felt they had no choice.

Maybe sponsors and affiliates were already applying pressure too -- the two groups whose voices matter much more in network television than social media reaction from the general public.

As disappointed as ABC must be at losing this show that was poised to make them millions next fall, at least the network has other shows.

With her poorly thought-out tweets, Roseanne has robbed her cast and crew of a rare opportunity for wealth (not to mention experience) -- particularly for those cast members (such as some of the child actors pictured with Barr above) for whom the new “Roseanne” was a huge break. For them, suddenly, the dream is over.

Her firing also robs TV of a voice and point of view on television that was also rare (and nearly unheard of) on scripted, network television.

The new “Roseanne” was even credited with igniting a so-far nascent trend toward the development of shows whose characters would not necessarily be cut from the same liberal cloth as the majority of TV characters.

Fox's planned revival of the Tim Allen sitcom “Last Man Standing,” announced just two weeks ago, is the best example of this. Is this show now in jeopardy?

Some commentators are adopting a “we told you so” attitude in the wake of the Roseanne tweet controversy. See, ABC? they’re asking. Roseanne has behaved erratically for decades. What made you think she would behave any differently now? The network should have sensed this revived relationship with Roseanne would end badly.

Oh well -- that’s all 20/20 hindsight. The fact that this implosion was, in fact, unpredictable is what makes this rise and fall such a great story.

When I heard about it on Tuesday, I had the same old feeling I always have at such a time: What a story, I thought, and a new one, at that -- prime-time television's biggest star, on top for just under two months, cashiered over tweets. What on earth will happen next?

tv
6 comments about "Rise And Fall Of Roseanne Is Year's Top Story In Television".
Check to receive email when comments are posted.
Read more comments >
Next story loading