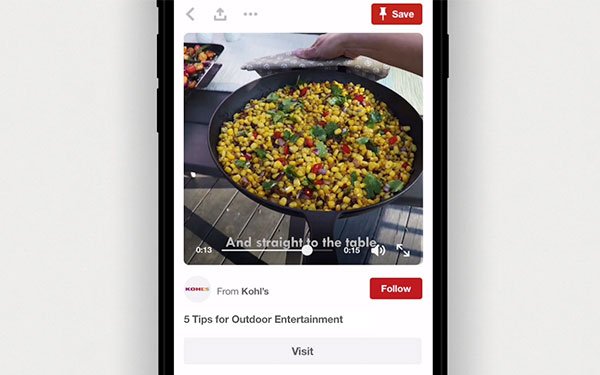 In the hopes of scoring a larger slice of the ad pie, Pinterest is rolling out a new video ad format.

The “Promoted Video at max width” unit spans across the app’s two-column feed and streams ad content right where users are browsing.

By contrast, “Promoted Video at standard width only shows up on one column of feeds,” a company spokeswoman said on Thursday.

As such, “this new format offers brands enhanced ability for storytelling, as well as an immersive canvas that will inspire Pinners to discover new products and services,” she added.

The new format is already being tested by big brands like adidas, American Express, Chevrolet, Kohl’s, Tropicana and Paramount Pictures.

Long synonymous with static images, Pinterest is doing its best to bring video into the picture. In the past year, the number of videos on its network has grown by 180%, according to internal data.

Citing an eye-tracking study by Neurons Inc., the company suggests that branded storytelling and instructional videos -- like how-tos or demos -- resonate with Pinners. Pinterest is also to attract a broader audience and a more diverse assortment of brand partners.

No longer just a platform sharing beauty tips and interior-design ideas, Pinterest says it is gaining traction in other areas, and entertainment especially.

Stateside, Pinterest says that more than 42 million users now use its platform for entertainment ideas. Along with Paramount, the platform has attracted brands like STX Entertainment, Legendary Entertainment and Warner Bros.

The new “Promoted Video at max width” unit is designed to attract such brands.

To expand further in this category, Pinterest recently hired Tina Pukone, an entertainment strategist, and Mike Chuthakieo, who will lead entertainment sales.

Across categories, Pinterest’s aggressive ad efforts are paying off. Last year, the company reportedly took in $473 million in ad sales, which represented a 58% increase year-over-year.