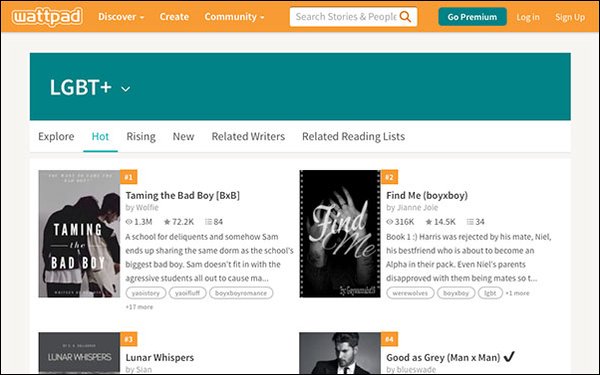 Wattpad is donating $1 to the International Lesbian, Gay, Bisexual, Trans and Intersex Association for every LGBTQ+ story published with the tag #WATTPRIDE on its platform, in honor of Pride month this June.

The campaign from Wattpad — a storytelling platform where content is created and published by users is called “Pen Your Pride Write-a-thon.” It encourages Wattpad users to write, read and share their experiences as LGBTIQ+ youth and allies.

Wattpad says it will donate up to $10,000 to ILGA this month as part of the campaign.

Users “can contribute their stories of coming out, finding love, exploring gender identities, or how they’ve been an ally and worked to form alliances, create awareness, and fight for LGBTIQ+ rights and equality,” according to the company.

Wattpad says its community of more than 65 million monthly users have spent over 700 million minutes reading LGBTQ+ stories in the past month. Wattpad users have shared more than 3 million new LGBTIQ+ story uploads in the last 30 days.

Wattpad is organized into specific “collections of niches,” Chris Stefanyk, head of brand partnerships at Wattpad, told Publishers Daily. Those collections span across various categories, such as fan fiction, sci-fi, humor and romance.

Wattpad also has "dozens of self-organized community hubs" that promote LGBTQ+ stories on the site.

“Around the world, LGBTIQ+ youth have been able to express themselves on Wattpad in a way they can’t anywhere else, creating a community of users celebrating diversity, positivity and ultimately, love in all forms. Creating a space for more people to share their stories can change the world," Stefanyk stated.

Wattpad hopes its campaign will help support ILGA as a consultant to the United Nations, where it lobbies on issues like sexual orientation, gender identity and expression and sex characteristics, on behalf of more than 1,300 member organisations from 141 countries.

Based in Toronto, Canada, Wattpad has previously partnered with organizations to promote inclusivity in digital storytelling. In 2017, the platform joined AT&T’s Later Haters campaign to increase anti-cyberbullying awareness.

Wattpad’s business is supported by digital advertising and branded content. Brands can sponsor a writing prompt for a competition, or a story on a Wattpad reading list.

Wattpad partnered with Lionsgate on a contest encouraging people to share stories about acts of kindness, to supports the film "Wonder."