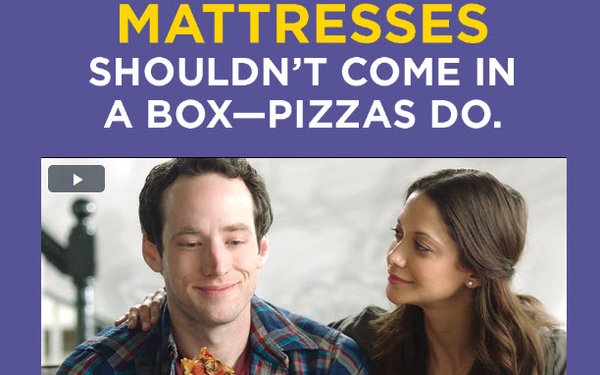 On its face, the synergy of a marketing partnership between a pizza brand and a furniture retailer is kind of a head scratcher.

In fact, a new effort by Papa John’s and Raymour & Flanigan is a definite case of strange “bedfellows” — in a literal sense.

The deal: Between May 30 and June 13, the furniture retailer will give any customer who buys a mattress costing more than $500 free Papa John’s pizza for a year. (The customer will receive, by email, one redemption code per month from July 1, 2018 to June 1, 2019, good for one large pizza each—one topping only, unless you pay for additional ones.) The deal also includes free next-day delivery of the mattress.

The campaign’s tagline begins to shed light on the logic behind the odd brand pairing: “Mattresses shouldn’t come in a box. Pizzas do.”

Raymour is taking a shot at a rapidly growing competitive threat: Caspar and other online mattress sellers that ship their products in boxes, notes Business Insider. A video on the furniture retailer’s campaign site has a couple proclaiming that they can’t understand why anyone would buy a mattress in a box, because it’s “crazy to buy a mattress without trying it.”

For its part, Papa John’s stands to gain added visibility and goodwill among potential and existing customers.

That’s a welcome opportunity, given the chain’s poor performance of recent times.

In addition to heightened competition from brands including Domino’s, Papa John’s has been suffering from a damaged image since last fall, when its National Football League sponsorship dissolved following a fight picked by Papa John’s founder, chairman and former CEO, John Schnatter, over the “take a knee” player protests.

Papa John’s’ North American same-store sales have been drooping — including a 5.3% decline in its latest quarter — and its share price has dropped 31% in the past 12 months.

New CEO Steve Richie has vowed to turn the chain around, with a strategy based on differentiating the quality of Papa John’s products to justify its higher prices. The chain is now promoting a $12.99 family meal that’s been catching on with consumers, Ritchie told Bloomberg.