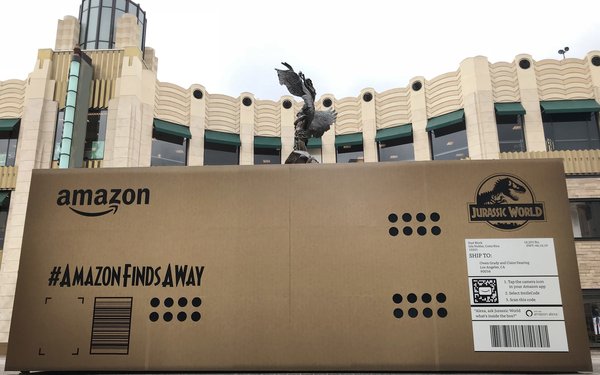 As movie marketers roam the earth, hyping the staggered June 6 premiere of Jurassic World: Fallen Kingdom, the Mesozoic Era has never been hotter. Of course, back 200 million years ago, marketing was just in its infancy.

The fifth of the Jurassic movies debuts Wednesday in the U.K., France, Germany, Spain, South Korea and Russia and on June 15 in China. On June 22, it opens in North America, Australia, Brazil and Mexico.

The rolling premieres just add excitement or, for Universal Studios they added anxiety because the May 24 premiere of Disney’s uber-hyped Solo: A Star Wars Story did just so-so. In Hollywood, so-so means flop. Since the other four Jurassic films have added $3.6 billion to Universal’s bank account, failure is not an option. One box office tracking site predicts an opening weekend of $139 million.

Though JWFK was never expected to be a as big a hit as Solo, expectations are sizable. The film is getting $185 million in marketing support, according to the showbiz website Deadline.com. That ranges from Dr Pepper, Doritos, Skittles, Juicy Fruit and Dairy Queen to Kellogg, which is promoting the movie on 10 of its cereals and snack items. (Dr Pepper is creating four “collectible” cans.) Worldwide, there’s another passel of promotional tie-ins with, among others, Hershey and McDonald’s.

The promotion started way back on Super Bowl Sunday, with a commercial from Jeep, which might be considered the official car of panicky Jurassic World visitors. The film’s pitch to sports fans will be boosted worldwide during World Cup telecasts beginning June 14. It has been fortified overseas with various T-Rex photo ops at major shopping centers, sometimes with JWFK stars Bryce Dallas Howard, Chris Pratt and Jeff Goldblum.

Last week Pratt and Howard showed up at The Grove shopping center in Los Angeles, where, just days before, a giant 40' L x 14' 9" H x 14' W Amazon package arrived, escorted, of course, by a Jeep Wrangler. Pratt and Howard opened the package to reveal a giant dinosaur that will lounge around the place until next week. Amazon said it was the biggest package it had ever delivered.

Amazon encouraged fans who own its voice assistant to ask Alexa what’s inside the big box. The “Jurassic World Revealed” skill then connected them with someone who gave more information and, certainly, it would seem anyone who had trouble guessing by themselves really, really does need artificial intelligence. The day the film premieres in the U.S., players can return to play an interactive audio experience for Alexa, from Universal and the interactive audio playbook Earplay.