Big Surprise Of De Niro F-Bomb: That CBS Bothered To Censor It 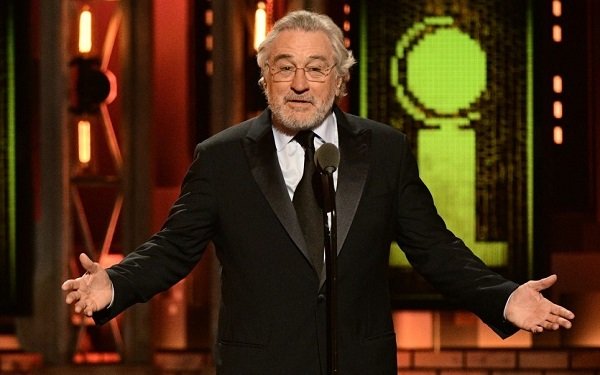 Bruce Springsteen might have been none too happy about having to follow Robert De Niro's surprise f-bomb nuclear attack against President Trump Sunday night at the Tony Awards.

Springsteen’s a genuine showman, and he might have felt upstaged -- in the worst way -- by the De Niro f-bomb onslaught.

De Niro's “F--- Trump!” declaration came during the Tony Awards telecast's final half-hour when De Niro came on stage to introduce a performance from Springsteen, who is currently appearing on Broadway in a one-man, autobiographical show.

De Niro was supposed to simply set the stage for Springsteen’s appearance and then get out of the way. Instead, the 74-year-old actor decided to go off script -- causing headaches for CBS and also creating a morning-after story that would detract attention from the awards themselves.

CBS activated its 10-second delay mechanism to prevent De Niro's f-bomb from being heard on U.S. television. However, the word was reportedly aired unbleeped elsewhere -- including Australia, according to one story I read.

Plenty of people have aired their opinions of De Niro's outburst on social media since the telecast Sunday night (which drew 6.32 million viewers, according to CBS -- up about 4% from a year earlier).

A great deal of the Twitter commentary was in agreement that De Niro went too far and came across as uncouth and unglued. Some of the people who posted those tweets made sure to emphasize, however, that they agreed with De Niro's opinion of Trump.

Others representing the half of the U.S. electorate who support Trump blasted De Niro for his vulgarity. The reaction of the audience inside Radio City Music Hall, who rose from their seats to give “F--- Trump!” a standing ovation, also came in for criticism -- not only on Twitter but in the right-leaning media as well.

The thing that united the two schools of reaction from those who support Trump and those who don't was a revulsion with De Niro's use of the f-word in this context within an annual telecast that is supposed to celebrate Broadway.

To many people, outbursts like this one have no place in a feel-good TV show like the Tonys. And apparently, the f-word is still capable of giving people a shock -- even in this day and age in which the word is in wide use, including on television and on Broadway.

In the Broadway hit “The Book of Mormon,” for example, the phrase “F--- you, God!” is part of the lyrics of one of the musical's song.

Perhaps with that lyric in mind, Robert De Niro didn't realize that the word would be verboten on CBS during a telecast celebrating Broadway.

The f-word is one of only a few words in the entire English language that gives people, and at least some editors, pause when they encounter it.

It might be OK to use the f-word nowadays in The New Yorker, for example, but in countless news stories about De Niro and the Tony Awards this week, the word was published with “f” followed by “bomb” or “word” or three hyphens (including here in the TV Blog).

Only a few other words get this treatment -- the n-word, the c-word (a pejorative used to describe some women) and sometimes the b-word (another word insulting to women that rhymes with “itch”).

While the f-word is apparently OK to use in a variety of dramatic contexts on networks such FX and IFC, to name just two of them, it is still forbidden on CBS and, presumably, the other broadcast networks as well.

It is also likely prohibited on a number of other basic cable networks too. On HGTV, for example, you never hear anyone use profanity, even when they accidentally smash a thumb while hammering a nail, or accidentally shoot a co-worker with a nail gun.

It is the view of the TV Blog that the f-word should not be uttered during the Tony Awards either. In this respect, Robert De Niro, whose proficiency with the f-word in his acting career is well-known, should probably not be asked back.

While they're at it, the Tony organizers should probably avoid inviting Joe Pesci or Samuel L. Jackson either.