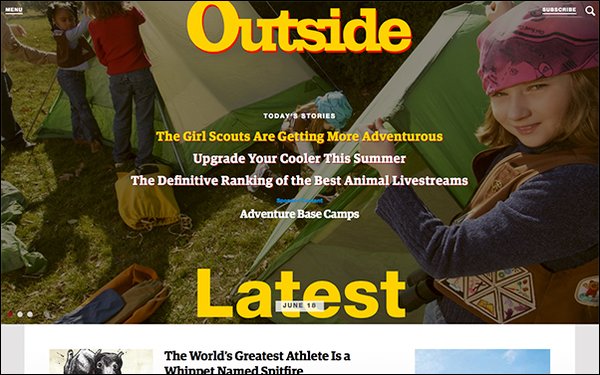 Outlets based in the U.S., like USA Today, which developed a separate site to comply with the new regulations while still serving their E.U. audiences, were showing a much faster download time.

The reason was simple: These outlets had stripped their sites of nearly all third-party ad services, with some sites delivering no ads at all. Many that are displaying ads, including Slate, New York and The Financial Times, are using Google Ads, “which has had an advantage in securing user consent to display targeted ads,” says Daoudi.

Daoudi provides USA Today—which displayed no ads on its site—as a prime example of how, when fewer third-parties are attached to a site, the user experience becomes much better.

“Unfortunately, sites relying on monetization through advertising don’t always have a lot of wiggle room when it comes to slimming down their sites. The key for them is applying site optimization techniques that help minimize the negative impact of heavier pages and a multitude of third-party services, particularly ad servers,” he says.

Daoudi adds, “If the performance of any [third-party] services slows down, it can degrade performance for the entire site. News sites should always have contingency plans in place. So if a third-party performance degradation is detected, the service can quickly be removed from the site, or replaced with another service.”

Some media brands, like Outside, are finding ways to slim down their websites and see better user engagement and faster download times as a result.

Earlier this month, Outside unveiled a redesigned homepage that downloads about 50% faster than the previous design, though Todd Hodgson, director of product management, adds it depends on the ad creative that loads, too.

Outside reduced the number of links on its homepage by over 50% after analyzing a year’s worth of data.

Users’ constructive criticism was clear: many felt the old homepage had too many sections replaying with comments like “I’m not sure where to look” and “the homepage feels overwhelming.”

“Our old homepage had too many links in general. Beyond the number of sections, there were just far too many choices, leading to decision fatigue,” Hodgson told Publishing Insider. “Users showed a strong desire for clearer pathways to archives our long-form content, as well as a unified section for our video and podcasts.”

The redesign ran through a four-week A/B test of the new vs. old homepage, with the new clearly outperforming in user engagement. Outside also created new opportunities for advertisers in the process, including opportunities for native advertising.

Though daily impressions dropped by 40%, ad engagement spiked by 60%.

“Quality and value of the homepage ad impression increased due to higher ad engagement,” says Hodgson. “Since Outside impressions are priced on value of quality, this will lead to higher homepage CPMs and an increase in advertiser demand of homepage impressions.

The newly designed homepage also “yielded a 5% better bounce rate,” exceeding expectations. By decreasing the bounce rate, Outside is able to deliver higher-quality ad impressions throughout the site, as more users reach the internal site.