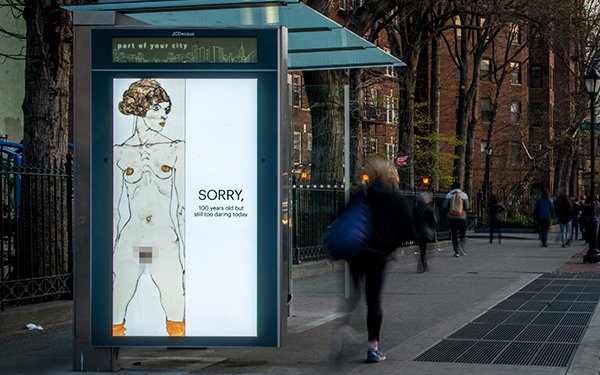 Earlier this year, the Vienna Tourism Board launched an ad campaign to celebrate the anniversary year of Viennese Modernism featuring the work of artist Egon Schiele, who died 100 years ago.

The images in question were a selection of Schiele’s iconic nudes, and the campaign was quickly met with a swift backlash, given regional public nudity laws.

Even cities like Hamburg rejected the campaign in its original state. A century after the artist’s death, his work is still deemed too controversial to be viewed in its uncensored state.

The board, rather than scrap the campaign, cheekily censored it, in the process spawning an international dialogue about censorship. Where a hint of pubic hair once was, a pixilated blur appeared. In other variations, a banner covered the indecent flesh in question, reading “Sorry, 100 years old but still too daring today.”

The images were accompanied by the hashtag #ToArtItsFreedom.”

New York also hosted the campaign. Across the city, Schiele’s censored works appeared on digital bus shelters, newsstands and the subway. The city’s campaign differed in one key way: an uncensored hand-painted mural appeared on the southwest corner of Lafayette and Spring Streets in SoHo.

To see a Schiele painting is to experience the frenetic energy of one’s own flesh. His figures seemingly move on the canvas, refusing to adhere to such simplistic ideas as defined lines or the natural angles of the human body. Schiele’s figures explode with the brutality of what it feels like to live the human experience.

How ironic, then, that we live in a time when violent images are regularly consumed, be it on Twitter, Facebook, cable TV or watching the evening news. People easily access brutal videos, yet Schiele’s figures still strike a nerve.

Why are horrific events consumed so easily, but a painting depicting a naked man, hard angles and electrified hair exploding from his being, considered taboo?

One idea: Schiele’s figures remind viewers they have a body that feels pain. Acknowledging such realities, at a time when people are likely more connected to their smartphones than their upstairs neighbors, breeds empathy. That's a dangerous tool to discover as governing bodies attempt to seize greater control of the media and human bodies themselves.

The ad campaign has ended, but Schiele’s work still features heavily in the Vienna art scene, where much of his artwork is collected.

However, this summer, four art shows will open in New York — the Neue Galerie, the Met Breuer, W + K Gallery and Galerie St Etienne —giving the public a chance to experience the artist’s work uncensored a century after his death.