Late-Night Attacks On Trump Are A Dog-Bites-Man Story 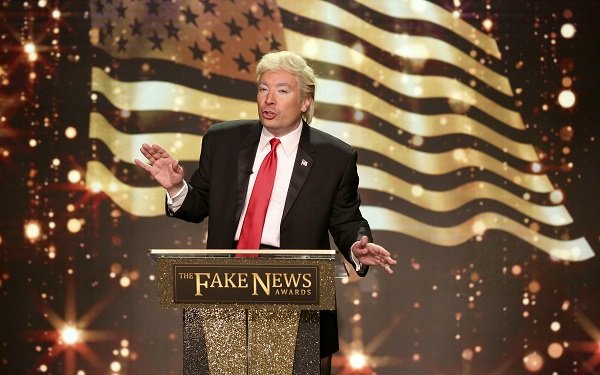 One of the most widely covered topics in news media today is the subject of outrage -- specifically, reactions to people and points of view we don't agree with.

The vast majority of these reactions are about President Trump, of course -- but also about what TV talk-show personalities say and what commentators and columnists write. Phrases are dissected down to the minutest detail and wording is nitpicked.

Thanks mainly to social media and its ability to give millions of people a voice in the cacophony, the reactions are faster, louder, angrier.

You scroll through Twitter sometimes, and it is easy to imagine thousands of people with their thumbs flying over their smartphone screens composing tweets while steam shoots from their ears.

Late-night TV has discovered this capacious appetite for outrage, particularly as it pertains to the president.

So night in and night out, the late-night shows and their hosts devote a great deal of their air time to hammering the president -- joking about him, of course (which is traditional for comedians on TV), but also criticizing him in ways that are not necessarily comedic.

It's not all comedy anymore, as in the days of Jay Leno and David Letterman. While much of the commentary and monologue lines are comedic, we all know it when Stephen Colbert or Samantha Bee veer away from comedy and carom into commentary.

At these moments, she tends to lean in and shout loudly, and he tries to form a serious expression on his face in an attempt to signal that he's not joking.

All of this is fine, since this is a free country where everybody is free to express themselves, right? The late-night shows and their hosts are only providing what their audiences seem to want, so who can blame them for whaling on Trump every night?

Since all of these late-night comedy shows are later divided into bite-size segments for network Web sites, YouTube and social media, the commentary and comedy are then widely disseminated.

In my daily routine, I can usually count on one of the TV trade publications -- in this case, The Hollywood Reporter and its Web site, THR.com -- to provide breathless morning-after coverage of the comedic commentary from the night before.

In the news business, the relative importance of stories was traditionally illustrated with the “dog bites man” example. If a dog bites a man, it is hardly a news story because it happens all the time. But a “man bites dog” story is a story because that's not something you see every day.

“Late-Night Host Laces Into President for Latest Pronouncement” seems more like the former. They do it every night, so why is it “news”?

news, politics, tv
1 comment about "Late-Night Attacks On Trump Are A Dog-Bites-Man Story".
Check to receive email when comments are posted.
Next story loading