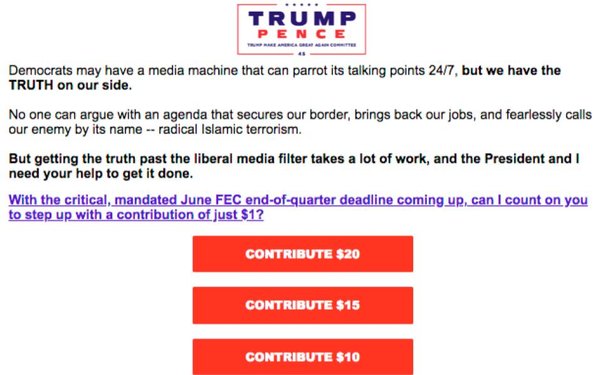 There's an interesting direct-to-consumer media funding model emerging from the Trump-Pence campaign this week. In an email signed by Vice President Mike Pence, the campaign is promoting contributions by implying it will be used to offset the Democrats "media machine."

The email solicitation does not delineate specifically what the machine is, but presumably means the so-called "mainstream media" Trump and his supporters routinely attack as disseminating anti-Trump "fake news."

"But getting the truth past the liberal media filter takes a lot of work, and the President and I need your help to get it done," Pence's pitch continues, pushing hot buttons to kick-start donations.

Nowhere in the email solicitation does it actually disclose whether the funds would be used to counter media coverage.