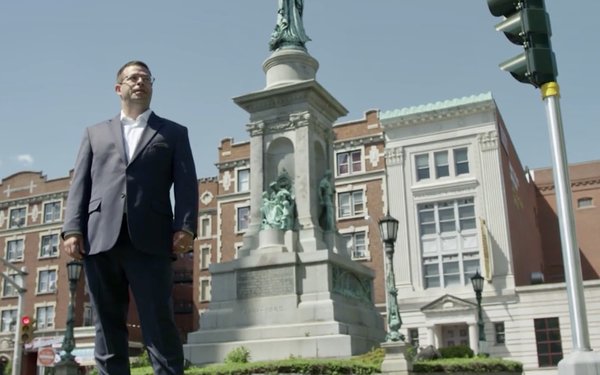 For the past 10 years, Men’s Wearhouse has sponsored a program that helps unemployed men and women get a new job with the shirt off your own back.

The  Suit Drive invites consumers to donate business clothing of all types — suits, pants, ties, shoes, and women’s business attire, too — so that the chain can get them to people looking for work. Men’s Wearhouse gives 50% off on purchases to people who come in to donate.

It kicks off its month-long advertising campaign Monday with an ad in which it urges viewers to “donate confidence” by bringing in their used clothing for others. “That tie that you haven’t worn in years. It’s more than a tie,” the ad’s narrator intones. “It’s a silencer of self doubt.”

It would seem you might see your threads walking down the street back at you more quickly than usual. In May, the government reported unemployment is at an 18-year low of 3.8%. That’s 223,000 new workers. June’s statistics will be released July 6.

And while styling might not be the top thing employers look for, every edge helps. As Vogue editor Anna Wintour once remarked, “If you can’t be better than your competition, just dress better.” The U.S. Department of Labor’s own job-tips website feature says, “Many employers expect jobseekers to wear a suit — preferably one in a conservative color such as navy blue, gray, or black” (though it also says that the right kind of casual also works, depending on the employer).

The point is, employers still judge some books by their covers, even as dress at work has never been less dressy.

In the last decade, Men’s Wearhouse has collected more than 1.6 million pieces of clothing for professional men and women, all of it donated to more than 150 non-profit organizations. Those agencies, in turn, supply the clothing to people trying to enter, or re-enter, the workforce, through their own programs. Some of those agencies even provide a tailor for alterations.

“Year-after-year, we’ve seen the number of items donated through the suit drive increase, and none of that would be possible without the support of our customers who understand the priceless benefit and irreplaceable value of having a suit,” says Bruce Hershey, the vice president of marketing, in a prepared statement. “And that’s what this year’s campaign is all about; the power giving or receiving a suit can have.”

The ad and a related video were prepared by EP+Co, with offices in Greenville, S.C., and New York. The 1:07 video chronicles the importance of the new professional clothes supplied to Erin, out of work in Connecticut. He jokes that three people who knew him and saw him looking good referred to him as “the mayor” as he walked down the street.

“I was a man before I got this suit,” he says. “But now I’m a man. With a suit. And a little more confidence.”