'Sharp Objects' Offers The Worst Our World Has To Offer 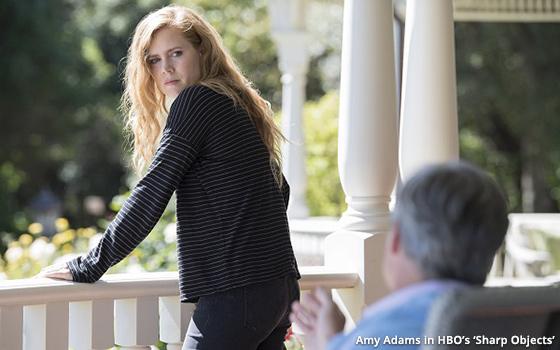 When did TV become so serious?

The question arose yesterday as I was watching the first episode of a new, sad drama series coming to HBO this weekend.

Called “Sharp Objects,” this eight-part “limited” series premieres Sunday night. Here, the word “limited” is being applied in this context to indicate that this series, like other series described in the same way that are all over TV these days, is extra-special -- like a limited-edition book or a small-batch whiskey.

The “limited series” descriptor also sometimes indicates a drama of particular potency -- filmic “storytelling” (another overused word these days) in which an array of devices are applied -- in this case flashbacks, shadowy characters seen from afar and dream sequences that end abruptly.

“Sharp Objects” is based on a novel of the same name by Gillian Flynn about a St. Louis newspaper reporter's assignment to return to her hometown in south Missouri to cover the story of a preteen girl's murder and another's sudden disappearance.

Played by Amy Adams, the reporter is an alcoholic who drives drunk, smokes cigarettes by the carton and loves to listen to Led Zeppelin. As almost anyone can predict who will watch this show, her return home opens up a Pandora's box of evil memories and unpleasant associations.

The memories seem to have to do with her own preteen childhood, which could have some bearing on the crimes she is now investigating. The associations include her relationship with her mother (Patricia Clarkson), who also drinks a lot and from whom the reporter is estranged. As soon as they come into contact, they are at each other's throats.

Since this is an HBO series, the surface qualities of the show are top-notch. It looks great, locations are well-chosen, interiors feel authentic, and Adams is appropriately made up to look “ordinary” even though we all know she is an A-list movie star.

In fact, “Sharp Objects” has all the earmarks of a series that will draw mostly critical acclaim and chatter for HBO this summer. And there is nothing wrong with that.

However, the subject matter feels like a cliché -- crimes against children, mysteries in a small town, the troubled character (man or woman) who left town but has now returned to confront her past, all while drunk, smoking, rocking out in her car to Led Zep, and barely sleeping.

TV viewers -- or anybody for that matter -- are free to take up their leisure time watching TV series like this one. But what is the value?

As one who has soaked up more than his share of such sad and depressing TV content over the decades, I find the constant portrayals on TV of the absolute worst that our world has to offer to be without value.

Maybe that is why I am increasingly drawn to comedies on TV -- sitcoms -- which often show us a better side of our world, and in easy-to-digest 30-minute portions too.

So enjoy “Sharp Objects” with all of its sad memories, murders, secrets and mother-daughter estrangements. Meanwhile, I will be seeking my entertainment elsewhere.

tv
1 comment about "'Sharp Objects' Offers The Worst Our World Has To Offer".
Check to receive email when comments are posted.
Next story loading