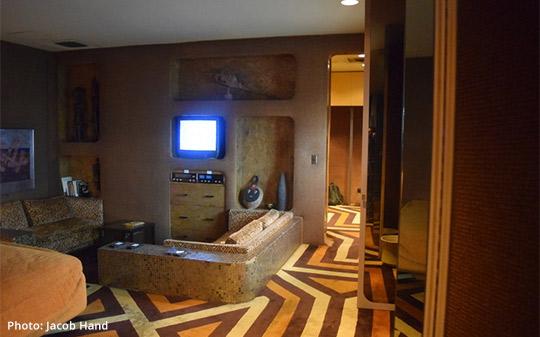 Ebony and Jet secured a proud legacy as African-American magazines.

Published by Johnson Publishing Company until 2016, the iconic magazines and its owners had a unique sense of design and played a vital role in the history of American publishing.

All of which is captured in the just-opened art exhibit “A Johnson Publishing Story,” running through September 30 at the Stony Island Arts Bank, part of Art Design Chicago.

Organized by artist Theaster Gates, it chronicles the media landscape Ebony and Jet operated in and how JPC shaped black culture in the mid-20th century.

“A Johnson Publishing Story” includes 15,000 items donated to the Rebuild Foundation by JPC. Books, African art, periodicals, ephemera, as well as original mid-century furnishings custom-designed for the Johnsons, are all part of the exhibit. John Johnson’s desk is here, along with his JHJ paperweight.

There is also an IBM Selectric typewriter he had covered in red animal skin versus the usual plastic. A standout: a two-story, wood-rich chamber lined with bookshelves and restored Johnson furniture.

The first floor boasts “The Johnson,” a lounge for live music, readings and craft cocktails. The carpet covering the stage is also from JPC. The second floor library will become a reading room; the third floor will exhibit photography that captures the Johnson era.

“There was this black intellectual, entrepreneurial, creative hotbed here,” Gates told the Chicago Tribune, which the Johnsons personified.

Like many publishers, the JPC was hit by changing economics. The Johnsons sold the building in 2010 and moved out in 2012. Today, the Johnson Publishing’s office tower is being converted into 150 residences. But it will retain the Ebony and Jet sign on its top, a reminder of its famed past.

In 2016, after publishing Ebony and Jet for seven decades, Johnson Publishing sold the titles to Clear View Group, an African American-owned private-equity firm. The new owners laid off most of the Chicago staff and moved operations to Los Angeles.

Ebony remains a monthly and each year selects the "100 Most Influential Blacks in America." It was sued last year for failure to pay contributors. Jet printed its final print issue in June 2014 and is now a digital app.