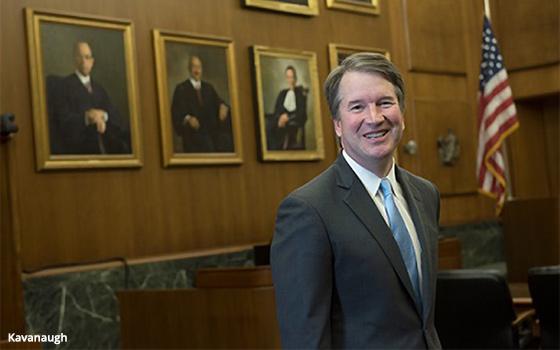 Conservative judge Brett Kavanaugh, nominated Monday night for a spot on the Supreme Court, is on record as opposed to the Obama-era net neutrality regulations.

Last year, Kavanaugh said in a written opinion that he believed the Federal Communications Commission lacked authority for the regulations, which the agency approved by a 3-2 vote in 2015. The rules reclassified broadband as a utility service, and imposed some common-carrier regulations on providers, including prohibitions on blocking and throttling material and on charging higher fees for prioritized delivery.

"Congress has debated net neutrality for many years, but Congress has never enacted net neutrality legislation or clearly authorized the FCC to impose common-carrier obligations on Internet service providers," Kavanaugh wrote. "In a series of important cases over the last 25 years, the Supreme Court has required clear congressional authorization for major agency rules of this kind."

Monday evening, President Trump nominated Kavanaugh to replace Anthony Kennedy on the Supreme Court. Kavanaugh, who previously clerked for Kennedy, has written around 300 opinions, including one about net neutrality. In that opinion, he dissented from a decision to reject additional review of the rules.

A coalition of Internet service providers sued the FCC in the D.C. Circuit Court of Appeals, in hopes of vacating the rules. A three-judge panel ruled against the broadband carriers in 2016. The carriers then sought a review before the entire Circuit Court. The majority of the court rejected that request, but Kavanaugh said in a dissenting opinion that he believed the rules were invalid.

Kavanaugh argued both that the rules exceeded the FCC's authority and that rules violated the First Amendment by forcing broadband carriers to transmit all types of content. He said that government agencies couldn't regulate content transmissions unless the agencies first found that there had been a failure of "market power."

Questions about net neutrality are almost certain to come before the Supreme Court in the near future, given that net neutrality advocates as well as opponents are interested in litigating broadband policy questions. The current FCC repealed the Obama-era rules last year, but a host of net neutrality proponents -- including state attorneys general, tech compaines and advocacy groups -- are challenging the repeal in court.

Currently, net neutrality is seen as a partisan issue on Capitol Hill, with Democratic lawmakers generally in favor of restoring the common-carrier rules and Republicans in Congress opposed to doing so. But it's not clear that conservative judges on the Supreme Court will be inclined to oppose net neutrality rules.

In 2005, Supreme Court Justice Antonin Scalia dissented from an opinion that allowed the FCC to deregulate broadband by treating it as an "information" service, instead of a common carrier service. "After all is said and done, after all the regulatory cant has been translated, and the smoke of agency expertise blown away, it remains perfectly clear that someone who sells cable-modem service is 'offering' telecommunications," Scalia wrote at the time.