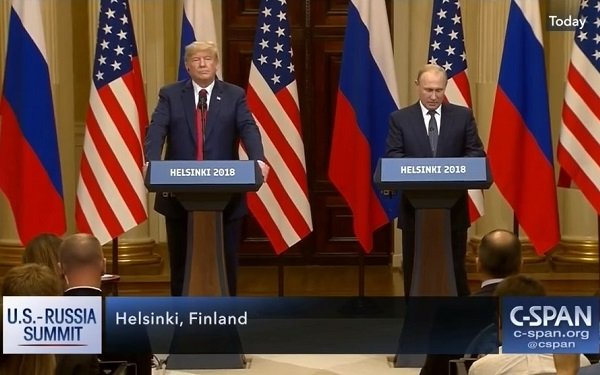 The reviews are in, and they are unanimous: Donald Trump just gave the worst performance by a United States president on TV this year, if not ever.

The “show” was the televised news conference in which Trump appeared Monday from Helsinki, Finland, alongside Vladimir Putin following their closed-door summit meeting.

After this 46-minute summit post-mortem was held, the pans were fast and furious: Trump had said one wrong thing after another -- praising  and appeasing Putin (leader of a country that is not a U.S. ally), complaining about the U.S. intelligence and law-enforcement apparatus that he happens to head as President of the United States -- and, most notably, taking at face value Putin’s claims that Russia had no involvement whatsoever in any schemes to undermine or interfere with the 2016 presidential election.

Trump’s enemies jumped all over his statements, and so did many Republican allies such as Newt Gingrich, who called the news conference “the most serious mistake of [Trump’s] presidency.”

The news conference and the political backlash have both been discussed at length and ad nauseam ever since Monday. But Trump’s statements and gaffes aside, how did the news conference play strictly from a TV standpoint?

When considering these kinds of events from a TV or audiovisual point of view -- what you might describe as a "televisual” perspective -- this was far from Donald Trump’s finest hour, to say the least.

One of the very first impressions he made, almost from the first moment he opened his mouth, was that he may have been physically and mentally fatigued. This does not excuse the lack of judgement he used in making the statements that attracted so much criticism.

On the contrary, the president should have had the good sense to prepare better for the news conference because he may have been somewhat worn out from the traveling and meetings he had already had over the previous few days -- most notably, the NATO summit.

But typically, among the news stories that came out in the days since the news conference was a report that Trump’s staff tried to prepare him, but he ignored them. This story gets repeated all the time after various Trump events. The man hates preparation, and it often shows.

The president’s fatigue could be sensed in the way he stood, the manner in which he seemed to struggle to remain attentive when it was President Putin’s turn to speak, and in the way Trump talked. A slight slurring of his speech was not overly conspicuous, but neither was it difficult to detect.

Generally speaking, Trump, 72, seemed as if he had not had enough rest lately. And participating in a one-on-one meeting with Vladimir Putin -- who gives every appearance of being physically and mentally vigorous at age 65 -- may have also been a struggle for Trump.

Again, this is not meant to excuse how Trump comported himself at the news conference. Indeed, presidential stamina needs to be managed. At one point, Trump absentmindedly stuck an index finger in one ear as if to clean out an errant bit of wax -- this during a news conference that was being televised globally.

A lack of rest may have been the reason Trump seemed to lash out so much in response to questions about the Mueller probe.

He even felt it appropriate to recap the 2016 presidential election. “We ran a brilliant campaign, and that’s why I’m president,” he said airily at one point, stepping in to answer a question that had actually been directed at Putin.

Love him or hate him, performing on TV is what got Trump elected, at least in part. This week’s news conference notwithstanding, he is very good at using television.

Remember all of those prime-time debates in which he knocked off the other Republican hopefuls one by one, as if the nomination process was a reality show like “Survivor” or “The Apprentice”?

Now that he is president, however, this week’s dismal performance may indicate that his best television days are behind him.

When he was on the campaign trail, working without a script became a great advantage for Trump. Not only did his fans love his off-the-cuff comments, but the anything-can-happen nature of his campaign meant that he would be trailed by TV news cameras everywhere he went -- which also worked to his advantage.

But as president, he has to learn that scripts are of the utmost importance, even if they are not nearly as exciting as the improvisations that got him elected.