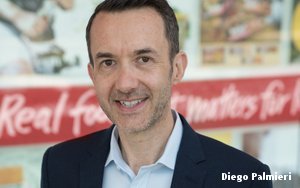 Palmieri, who most recently worked at SC Johnson for more than two decades, will be responsible for all aspects of marketing and consumer connection in the United States across the division’s portfolio of brands, which includes Campbell’s, Chunky, Well Yes!, Slow Kettle, Swanson, V8, Plum, Pace and Prego.

At SC Johnson, he was most recently general manager of the company’s Greater China business (China, Hong Kong and Taiwan). In this role he built the company’s entire e-commerce capability in China. Previously, he managed the Glade Home Fragrance business for all international markets and led the U.S. acquisition of The Caldrea Company, including Mrs. Meyer’s.

Palmieri also led the marketing for brands including Off! Repellents and the Pledge Grab-It electrostatic duster line. Palmieri began his career at Sanyo Electric Co. and then Nestlé Argentina, where he managed the Maggi soup and bouillon business.