Restaurant High Tech Will Be $300B Revenue Source By '25

It’s not just big box stores feeling the change from the digital explosion. A new survey estimates that by 2025 sales that come through digital channels will make up 30% of all restaurant transactions. That’s a $300 billion shift in spending patterns.

Right now, only about 6% of restaurant sales have a digital component, representing less than $50 billion, an indication of the massive changes ahead.

The new report from the retail management consultant firm  BRP and Windstream Enterprise, “The Restaurant Digital Crossroads:The Race To Meet Guest Expectations,” cites survey information from restaurant consumers juxtaposed with estimates from restaurant professionals about how they feel the industry is doing.

Mainly the data seems to be zeroing in on the quick-serve restaurant experience, not so-called fine dining.

While restaurants may be thinking about how new menu items will rock their world in the future, that may be small potatoes compared to how rapidly changing technology will create new consumer demands, particularly by younger patrons.

For example, the survey says 74% of Millennials and post-Millennials (Gen Z) consumers demand “ease of ordering and payment” but only 45% of the restaurant executives think the business has achieved “excellent execution.” Sixty percent of the diners expect free wi-fi; only 44% of the execs say they’re getting it.

“Millennial and Gen Z consumers value digital commerce and engagement capabilities at par with traditional factors,” the report says. “For Millennials, digital is shorthand for taking friction out of the order and payment process, allowing them to shop the way they want wherever they want. They, along with Gen Z, also value interactive technology and digital content (music, movies, games, digital shorts) more so than older generations.” 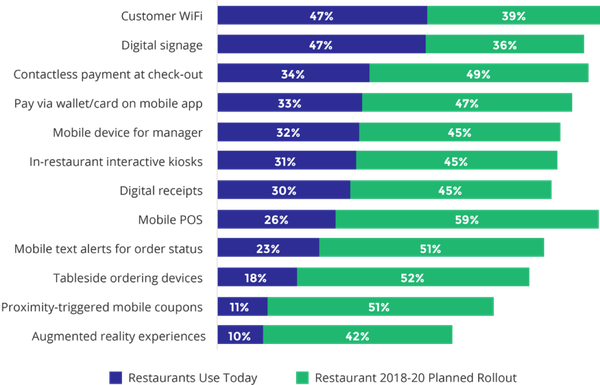 In addition to free wi-fi, the other top  tech advances that consumers say have a positive impact on their dining experience are “table side ordering devices”; the ability to use a restaurant’s mobile app to pay; and “contactless payment” at the counter.

One little wrinkle in the survey: While restaurants may feel compelled to caters to the demands of younger users, 74% of Baby Boomers say they won’t return after one or two bad experiences at a restaurant, but just 54% of Gen Z will stop coming, and only 62% of Millennials will go elsewhere.

In a chat with Marketing Daily, the report’s author, David Naumann, said he can’t authoritatively say why that is but he supposes it’s because older patrons have had more dining experiences, or spend more money dining out and expect more.

“Restaurant brands and operators that fail to consistently deliver on the promise of a digitally enhanced dining experience will experience business and brand erosion,” the report says.  “Even digital leaders such as Starbucks are not immune to operational under-preparedness. Its mobile order-ahead experience initially led to frustrating wait-times at pick-up for shoppers and higher labor cost for Starbucks.”

The report says the gap between the technology that restaurant customers want and what they’re likely to get in the next two years should worry the industry.

The report is not so discouraging, though. While right now it is difficult for restaurants to recognize a decent return on investment by increasing their spending on technology, the industry as a whole seems poised to achieve a “2x to 4x increase in technology deployment” in the next two years.

The report warns, though, that “even as operators focus on the new and sexy use-cases, they can’t lose sight of the fact that the underlying infrastructure and network is what powers the experience. The digital dining experience is a pipe dream without a high-åperformance network.”