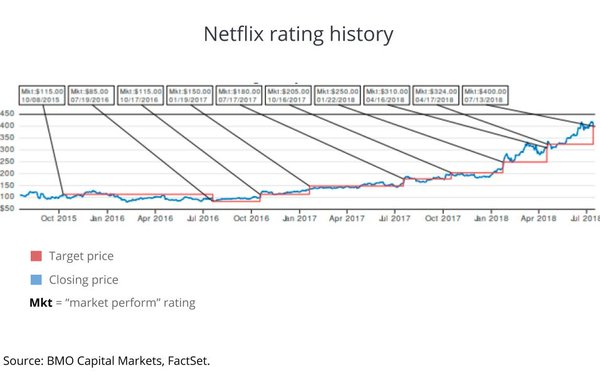 In the occasionally counterintuitive nature of the equities marketplace, a leading securities analyst this morning upgraded Netflix shares to “outperform” -- its highest rating -- from its long-term rating of “market perform.”

Salmon characterized his rationale as “righting a wrong,” explaining:

“To put this call into context requires being frank on being far too conservative on our prior ‘market perform’ rating for too long. Despite being generally cautious on the traditional entertainment sector (which has faced challenges in part due to the rise of SVOD offerings for general entertainment content), we had neglected to recommend Netflix out of desire for a ‘material incremental’ thesis beyond beating subscriber estimates; we also had concern over growing competition, and thus partially, pricing power.

“Put simply, we believe we have been overly cautious to date. Sometimes secular winners don’t need a ‘material incremental’ thesis, they simply need their stories to play out more and in doing so, Netflix has also beaten back on our concerns about growing ‘internet television’ competition (e.g., Amazon Prime Video’s global expansion). This is not to say that Netflix can show the same type of stock performance it has since the beginning of 2017 as that type of re-rating is likely behind us. But we also do not believe Monday’s results suggest a material change in the long-term trajectory (i.e., our 2019 and 2020 estimates are largely unchanged), and we do believe there are some, if not game-changing, intriguing new investment considerations that can power the stock back to highs and perhaps beyond to something closer to our bull case of $460.”