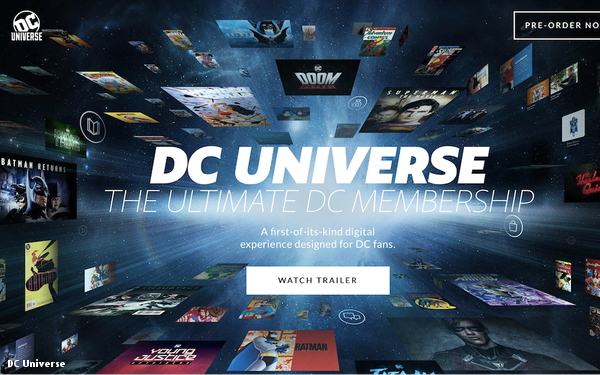 One of the more highly-anticipated niche streaming video services set to launch, “DC Universe,” has set its pricing.

DC Universe, which is based on the DC Comics universe of superheroes and characters, will launch in the fall for $7.99 per month, or $74.99 for the year. The company officially opened pre-orders for the service at San Diego Comic-Con this week.

DC Universe will feature digital comics, a library of TV shows and movies from the DC archives (including  the original Superman movies, and the Batman animated series), a daily news program, and a members-only store.

It will also feature a slate of original programming, including “Titans,” “Doom Patrol,” and “Swamp Thing.”

It will allow for offline viewing, and DC says it will be regularly refreshed with new comics, new shows and library content.

At $7.99 per month, DC Universe is pricing itself similarly to Netflix’s cheapest bundle. A yearly subscription would bring it down. To $6.25 per month, however, making it closer in price to ad-supported options from Hulu and CBS.

Still, other niche services have typically opted for less expensive pricing, acknowledging their status as second-tier streaming options after Netflix, Hulu and Amazon. Disney, for example, will launch a family-focused streaming service next year at a price “well below” Netflix, according to executives there. Disney’s ESPN+ service currently costs $5 per month.

Of course, comic book fans are known to be loyal, and the combination of cult favorite movies and TV shows, original live action and animated series and a digital comic-book reader might just be enough to entice them into buying in.