In Week Two, Cohen's Act Gets Tired In 'Who Is America?' 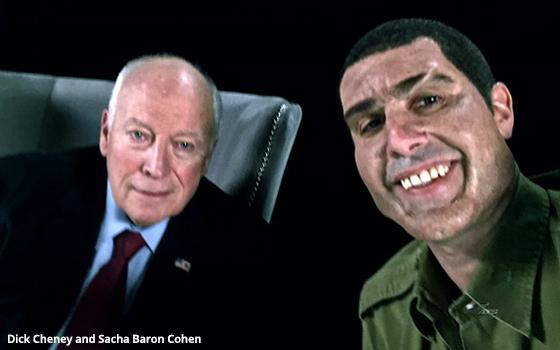 Have you ever found yourself in a conversation with someone who works so strenuously to make a point that he winds up repeating himself over and over again?

You might find yourself thinking, or perhaps even saying aloud in an exasperated tone: “OK, the point is made.”

That was the feeling I had when watching Episode Two of Sacha Baron Cohen’s new ambush-interview series “Who Is America?” on Showtime this past Sunday night. If Cohen’s point is that he can make people say or do the darnedest things, then he is making this point ad nauseam on this show.

Once upon a time, going back to his first such series, “Da Ali G Show” on HBO (2003-04), there was nothing funnier than Cohen’s interviews, in costume as Ali G, with the likes of C. Everett Koop, Buzz Aldrin and others.

But like so much else that comes and goes in our popular culture, what once seemed fresh now seems stale.

Koppel was the only one of these four who emerged unscathed. In the segment seen on “Who Is America?,” Koppel politely withstood a series of nonsensical questions posed by one of Cohen's newly created characters, Billy Wayne Ruddick Jr. Ph.D., self-styled journalist and proprietor of a right-wing Web site called Truthbrary.org.

At some point, Koppel could tolerate no more of this inane conversation and calmly ended it. It could not be determined whether Koppel figured out this interview was a put-on.

In another segment, the new Cohen character Erran Morad, who claims to be a former operative for the Israeli secret service, got Cheney to name his “favorite” war of the ones he was involved in (he answered the first Gulf War). Cohen also seemed to draw a gleeful reaction from Cheney over how many people died in it.

However, instead of coming across as revealing or even funny, you just got the feeling that Cheney had been unfairly tricked.

The same can be said of the hapless reality-TV star Corinne Olympios. She was interviewed by another new Cohen character, Gio Monaldo, a jet-setting fashion photographer from Italy.

In this segment, Olympios was drawn into a conversation in which she blatantly lied. Under questioning and coaching from Monaldo, she said she visited Sierra Leone for several months to help feed and educate starving children there.

Goaded by Monaldo, she even claimed that a warlord recognized her from “The Bachelor” and was so smitten that he called off a planned massacre of some 6,000 people.

Although the responsibility for uttering these lies ultimately belongs to her, it is also true that she was manipulated into saying them by the Monaldo character.

At first, the bit was funny in an outrageous kind of way. But as it continued, you could not help feeling sorry for this clueless person who was being conned.

Watching her spin these stories under encouragement from her interviewer, I asked myself: Why is Sacha Baron Cohen picking on her? She is small potatoes. And maybe she is the world's biggest ditz. But she did not deserve to be put in a humiliating position like this.

It was nearly impossible to generate any sympathy, however, for the Georgia legislator Jason Spencer, a Republican and apparently a racist. In the segment he did with the Morad character, Spencer was seen taking instruction on how best to battle Muslim terrorists.

Among other things, Morad instructed him to scream the n-word as loud as he could, which Spencer did with apparent gusto. Morad also told Spencer he could fight back against a Muslim by dropping his pants, backing into his attacker with his bare rear end and threatening to turn his attacker into a homosexual.

Incredibly, Spencer went along with this absurd idea and was seen on the show dropping his pants and aggressively backing up bare-assed toward the Morad character, all while screaming the n-word.

On Monday morning, fellow Republicans in the Georgia statehouse were calling for Spencer's resignation.

I still hold with what I wrote last week following the premiere episode of “Who Is America?” -- that the acting Cohen does on this show, and the total commitment he adopts to playing each of these characters, is among the finest work of its kind seen anywhere in the world of comedy.

However, you can also justly accuse Cohen of being little more than a skilled con man. Con men also play characters, and their goal is the ruining of people's lives. Cohen's goal seems to be embarrassment and humiliation, which isn't all that different.

tv
2 comments about "In Week Two, Cohen's Act Gets Tired In 'Who Is America?'".
Check to receive email when comments are posted.
Read more comments >
Next story loading