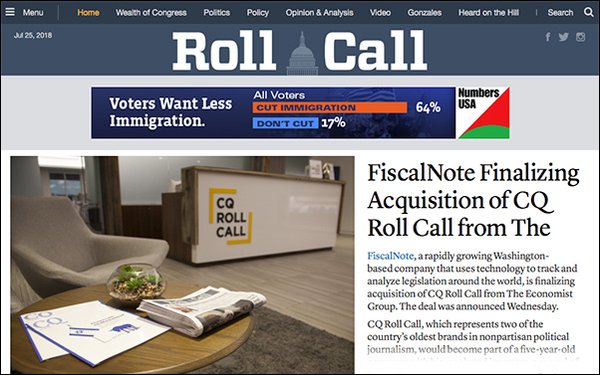 The acquisition is expected to be finalized later this year.

The idea is FiscalNote, which uses technology to track and analyze legislation around the world, would combine its tech and analytics with CQ Roll Call’s ability to add insight, context and editorial around the data.

Chris Stibbs, CEO of The Economist Group, would join the FiscalNote board of directors.

FiscalNote founder-CEO Tim Hwang would remain the largest individual shareholder and CEO of the company.

“The injection of technology and innovation into CQ Roll Call is the best way for CQ Roll Call to grow," McHale said in a Roll Call article.

“This is a wonderful opportunity to combine data, tech and insight with editorial expertise to create something no one else has,” Stibbs said.

This acquisition will not necessarily change how Roll Call covers legislation, but the publisher will further leverage data and analysis for its coverage of the workings of Congress, Stibbs added.

Hwang stated the acquisition will also "provide our clients with greater access to enhanced products that will inform their decision-making and maximize their influence on government as they tackle the challenging issues impacting their business."

FiscalNote has raised more than $50 million since its inception five years ago.