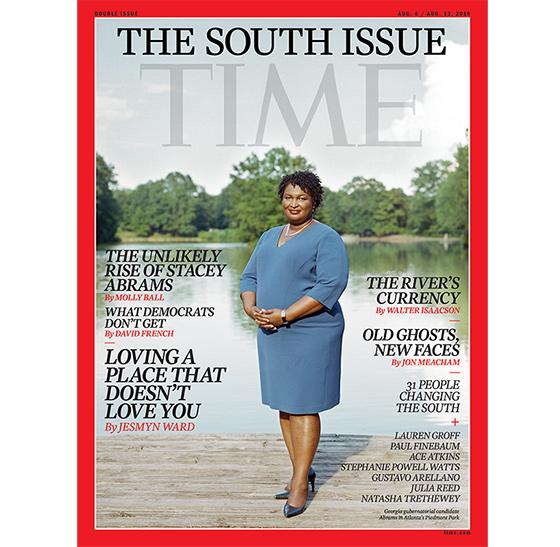 Time released its third special-edition issue dedicated to the American South since the magazine’s inception, nearly 100 years ago. The last two issues were spurred by significant moments in U.S. history: The Civil Rights Act became law in 1964, and in 1976, Jimmy Carter became the first president elected from the Deep South since the Civil War.

What is the impetus this time?

Time argues in the double issue that the South is the center of change in the U.S., and the political and cultural shifts happening in the region are complex and multi-layered.

“If she can pull it off, the implications would be profound, not just for Georgia, but for the rest of the South and potentially the nation,” writes Time’s Molly Ball for the issue’s feature story.

“My campaign argues that Georgia is different now, but it’s hard for people to believe that change happens,” Abrams says in the article. “It’s human nature — you don’t notice change when it’s gradual. The change in Georgia has been gradual but meaningful. My campaign seeks to harness it, but I’m asking people to not believe their eyes.”

Ben Goldberger, assistant managing editor at Time, told Publishers Daily that the special edition issue — which he edited — is an effort to “reveal the truth behind stereotypes.”

“Few are more misguided or longer-lived than the notion of the South as somehow fixed in time, forever-looking back,” he said. “This package was our attempt to show this essential part of America as it really is: complicated, dynamic, rich and relevant … Hopefully, readers all over the world will now have a better understanding of a critically important and all-too-easily caricatured place.”

The issue features a list of 31 people “who are changing the South,” profiling a range of influencers, from activists to chefs.

The magazine also explores the booming film industry in Georgia, and asks Southern authors and celebrities to share their favorite places in the region.

More than a dozen writers from the South contributed to the issue. Presidential historian John Meacham writes about the changing South, Jesmyn Ward weighs in on her mixed feelings about returning to Mississippi and David French discusses Southern politics.

Poetry from Southern writers like Natasha Trethewey, Jericho Brown and Maurice Manning are also in the issue.