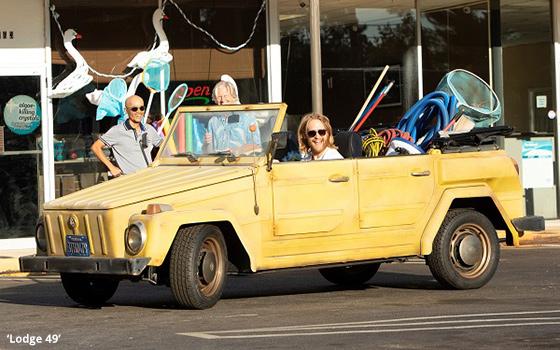 It took until August to come upon the best new series of the year, but here it is: “Lodge 49,” coming to AMC Monday night.

“Lodge 49” is the best southern California surfing drama since “John from Cincinnati” came and went on HBO in the summer of 2007.

Like “John from Cincinnati,” classifying “Lodge 49” merely as a “surfing drama” does not do it justice. It is about so much more. It is about life itself and the world we live in.

“Lodge 49” is about a young unemployed man living in Long Beach, California, whose life was going along swimmingly until he was hit with a series of calamities all in one year. As a result, he lost his father, home, family-run business and his livelihood.

The man's name is Dud (short for “Dudley,” his last name) and he is played by Wyatt Russell in the TV performance of the year.

The title of “Lodge 49” refers to the Long Beach chapter of the fictional fraternal order of Lynx. Dud stumbles into their midst through a series of fateful events that unfold similarly to the way real life does -- at random and at odd times.

I usually do not discuss TV shows in this way, but “Lodge 49,” like “John from Cincinnati” (a show I loved that almost nobody else liked or watched), has a literary quality not unlike a novel whose story and characters propel you along and keep you involved.

In addition to Dud, these include the sales staff of a plumbing supply company, a pawn shop owner, a donut shop employee, a librarian, a waitress and a holistic apothecary (which in California means “pot dealer”).

In so many ways, “Lodge 49” is the TV show about contemporary life that I long for every time I sit down to watch a new show in advance of writing a review.

In its depiction of real people living their lives, “Lodge 49” is spot on. And yet I noticed something incredibly refreshing about this show that you would think would not seem plausible in a scripted TV drama about the modern world: Hardly anyone is seen in the show using or otherwise staring into his or her cell phone (at least not in the first two episodes I watched).

Except for some very rare glimpses of cell phones, they are simply not a part of the people's lives in the Long Beach, California, that is depicted in this show.

While that might strike some as unrealistic, it is also possible that the writers of this show felt that too much of an emphasis on cell phones and their uses would serve as distractions to the stories they are trying to tell -- in much the same way, perhaps, that they serve as a distraction in real life too.

If the relative absence of mobile phones was a creative choice, then it was a good one. Their absence does not detract at all from the show.

In fact, where the character of Dud is concerned, he does not own a phone, mostly because he cannot afford one at the moment, but also because he is a man who prefers to live in the low-tech past, as evidenced by the VW Thing he proudly drives (photo above).

With taste being a very subjective and personal thing, and recognizing also that hardly anyone else loved “John from Cincinnati” as much as I did, I am hereby recommending “Lodge 49” to one and all, even though other people's tastes might (and do) differ markedly from my own.

For me, “Lodge 49” blew in at just the right time -- serving as a savior of the summer season and perhaps the entire year in TV.

tv
3 comments about "The Best New Show Of 2018 So Far: AMC's 'Lodge 49'".
Check to receive email when comments are posted.
Read more comments >
Next story loading