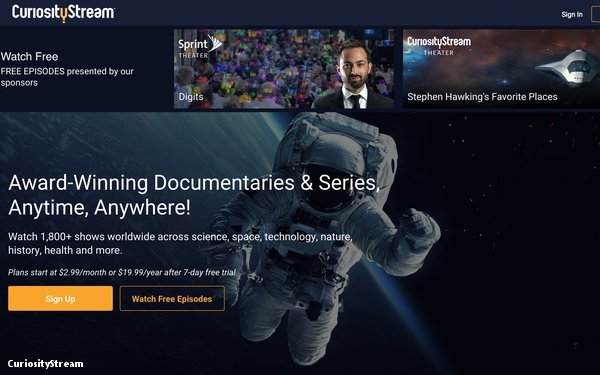 CuriosityStream, the streaming video subscription service founded by Discovery Channel founder John Hendricks, is lowering the prices on its monthly subscriptions and adding a free, ad-supported tier of service.

The free tier of service, called CuriosityStream Showcase, will include a rotating lineup of the company’s documentary and nature programming.

Both Showcase and the standard CuriosityStream tier will now include advertising, with six sponsors each securing category exclusivity. For example, Sprint will be the exclusive telecom sponsor for CuriosityStream.

There will be no commercial breaks, with only 15-second pre-roll ads and branding experiences for advertisers. Other advertisers in automotive, pharmaceuticals, banking, insurance and aerospace should be added by the end of the year.

CuriosityStream had secured around one million paying subscribers, but that wasn’t quite enough to sustain the business.

The service has also been made available through cable and satellite partners and streaming vMVPDs, both as a premium offering and in some cases as its own “channel.” The new Showcase tier will be made available for free to those partners as well.