FCC Comment System Crashed Due To 'Apparent Shortcomings,' Not Cyberattack 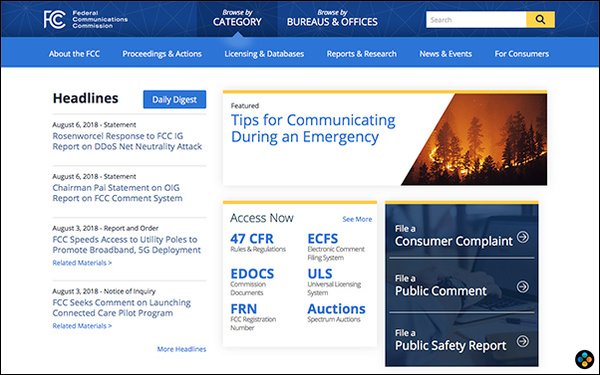 Last spring, when the Federal Communications Commission was considering whether to repeal the Obama-era net neutrality rules, HBO's John Oliver not only endorsed net neutrality on his program but urged viewers to submit comments to the agency.

Shortly after his show, "Last Week Tonight with John Oliver," aired on May 7, the FCC's comment system crashed. At the time, some observers speculated that the FCC's system had been overwhelmed with an influx of comments by net neutrality supporters, but the agency publicly blamed the problem on a distributed denial of service attack.

But a new report by the agency's Office of Inspector General concludes that the crash was the result of "apparent shortcomings" in the comment system, as opposed to a denial of service attack.

"The May 7-8, 2016 degradation of the FCC’s [comment system] was not, as reported to the public and to Congress, the result of a DDoS attack," the report concludes. "Rather than engaging in a concerted effort to understand better the systematic reasons for the incident, certain managers and staff at the Commission mischaracterized the event to the Office of the Chairman as resulting from a criminal act, rather than apparent shortcomings in the system."

The report also notes that the FCC was aware that HBO was planning to run "a segment that could generate a significant public response," but that the agency's IT group wasn't notified about the program in advance.

"Had such notice been provided, the IT group may have been able to take steps to ameliorate or prevent" the comment system crash, the report states.

On Monday, before the report had been made public, FCC Chairman Ajit Pai admitted that the agency's initial explanation for the crash was incorrect. Pai, who spearheaded the repeal of the Obama-era open Internet rules, blamed the former chief information officer for the false explanation about the comment system crash.

"I am deeply disappointed that the FCC’s former Chief Information Officer (CIO), who was hired by the prior Administration and is no longer with the Commission, provided inaccurate information about this incident to me, my office, Congress, and the American people," Pai stated. "This is completely unacceptable."

FCC Commissioner Jessica Rosenworcel, who supported the former rules, said the investigation proved that the agency's prior explanation was "bogus."

“The Inspector General Report tells us what we knew all along: the FCC’s claim that it was the victim of a DDoS attack during the net neutrality proceeding is bogus," she stated. "What happened instead is obvious -- millions of Americans overwhelmed our online system because they wanted to tell us how important internet openness is to them and how distressed they were to see the FCC roll back their rights."