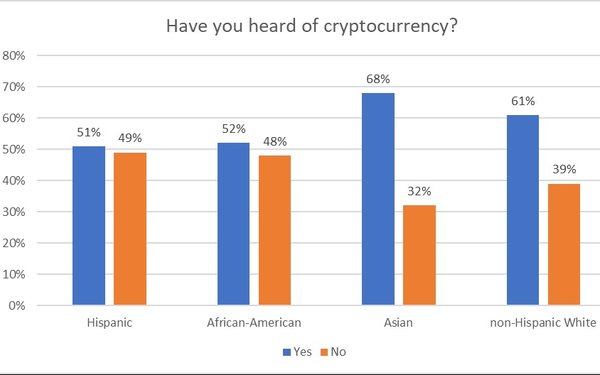 Almost 60% of the total market has heard of cryptocurrency. But if you are Hispanic or African-American, you are less likely to know what bitcoin is or how it works.

Among Asian-Americans, however, this isn’t the case. According to our most recent study, “Cross-Cultural Cryptocurrency Insights,” nearly 70% of Asian-Americans are aware of cryptocurrency, followed closely by non-Hispanic whites at 61%.

But awareness of cryptocurrency among Hispanics and African-Americans is low, which is  surprising for two cohorts that typically over-index in digital usage and awareness. So what makes this technology so different?

While overall household income for Latinos is rising in the U.S., they are still significantly below the U.S. average household income, which alludes to another key driver of low adoption: education levels.

But if minorities aren’t buying cryptocurrencies, who is?

Cryptocurrency has long since gained the reputation for being most popular among affluent white males. But this virtual currency is gaining popularity cross-culturally, yet at a different pace among each cohort.

Looking at respondents who have heard of cryptocurrency, there are no statistically significant differences among those who have purchased the most well-known cryptocurrency, bitcoin, in the past 12 months.

Non-Hispanic white respondents have purchased directionally more bitcoin than the other cohorts at 18%. Hispanic, African-American, and Asian respondents are virtually on par at 15%, 15%, and 14% respectively.

Education and exposure will make the difference.

While cryptocurrencies experienced a recent fall in valuation, they are still being invested in, and are also being considered by some countries to replace their official currencies. Minority communities, in general, are at risk of missing out on this conversation, which has broad implications for the U.S. economy.

For cryptocurrency to be taken seriously in the U.S., more must be done to educate Hispanic and African-American communities on what cryptocurrencies are and how the underlying blockchain technology works for them, to reach critical mass in adoption.