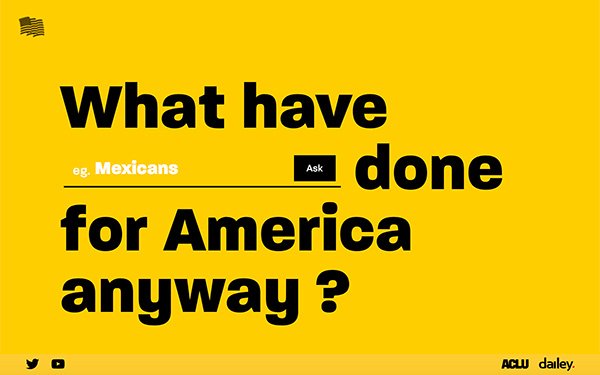 The issues of diversity, immigration and DACA continue to make headlines, which is why Los Angeles-based agency Dailey is updating its passion project.

WhatDiversityGivesUs.com  is an in-house-created web site, to inform readers about the contributions of newer arrivals.

The site asks: “What have [blank] done for America anyway?”

Results generated from a curated list highlight the contributions of various ethnic groups and other underrepresented identities. For example, searching “Mexicans” yields various contributions, including the artificial heart, ebooks and popcorn.

Searching “Muslims” results in surgery, chess and YouTube. Each contribution is linked to a source website. The site includes a link to the ACLU, encouraging visitors to take action and donate.

From the outset, the agency built the idea of evolution into the creative concept

"We know that identity isn’t always readily apparent, so we expect to update our entries," says project leader/executive creative director Marcus Wesson. "If a public figure is featured on our site because they are Jewish, and then come out as gay or trans, we’ll cross-reference that within our site. We’ll keep growing as our understanding grows."

The site has "exceeded our expectations" since its July 4 launch, says Wesson. "We’ve received a warm reception from the industry, media, diversity advocates and the general public."

Still, he admits, it is time-consuming to research and update.

"Like in any agency, our paying clients come first," he says, adding the site was created in Dailey Labs, which specifically handles passion and side projects. "But it wasn’t difficult getting people involved. From partners to digital teams to project managers, everyone agreed this was an important social cause."

This isn’t the first time Dailey has gone political. For the 2012 election, the agency did a bipartisan Smack-A-Candidate activation that allowed users to tweet a punch to either Romney or Obama.