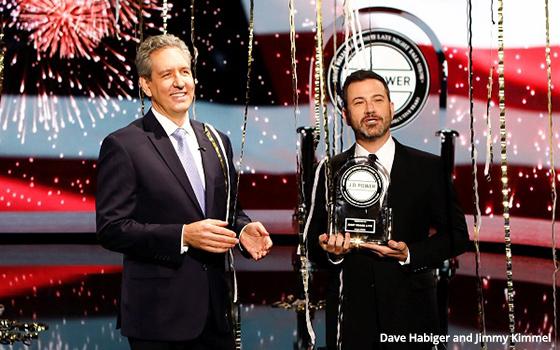 Jimmy Kimmel and his ABC late-night show received an honor this week unlike any other ever bestowed upon a television show of any kind -- a J.D. Power award.

It was a first for a television show and also for the famed 50-year-old research company whose specialty is “measuring customer experience.”

In our collective pop culture, the name “J.D. Power” comes up most often in car commercials. The ubiquity of the company's name in car ads must have piqued the interest of a writer or producer (or possibly Kimmel himself) at “Jimmy Kimmel Live.”

The result was more than six minutes of network airtime on the “Kimmel” show devoted entirely to J.D. Power this past Monday night. The bit included two appearances by J.D. Power President and CEO Dave Habiger (pictured above with Kimmel).

Habiger was seen first meeting with Kimmel in a made-up office in the “Kimmel” studios. And later, Habiger was seen bestowing the first J.D. Power award for “Most Reliable Midsize Late-Night Talk Show With the Same Host for 15-Plus Consecutive Years” to Kimmel personally.

The bit, which you can watch here on YouTube, even concludes with a hilarious new promo spot in which this prestigious J.D. Power honor is showcased.

Some of the bit's most creative moments came as two researchers from the company (who may have been actors) were seen wearing white lab coats and reading questions from a clipboard to members of the “Kimmel” audience.

In a nod to J.D. Power’s notoriety in rating car-customer satisfaction, one audience member was asked if he was happy with the legroom he was experiencing in his seat.

Another man was surveyed as he exited the men's room. “On a scale of 1-5, with five being the highest, how satisfied were you with your bathroom experience?” asked the J.D. Power researcher. “Five!” came the reply.

A woman was asked to rate Kimmel's “reliability.”

“So, thinking about Jimmy's performance tonight on the show, would you say it wasn't very reliable, somewhat reliable or very reliable?” the researcher asked her. “Very reliable,” she answered.

Based on this kind of overwhelmingly positive feedback, the “Kimmel” show got its award.

“Well, Jimmy, after meeting with you and reviewing the data from the research we conducted, I’m proud to inform you [that] your customers are truly satisfied,” Habiger told Kimmel on stage.

“So, on behalf of everyone at J.D. Power, we are proud to present the first and only JD Power award for the Most Reliable Midsize Late-Night Talk Show With the Same Host for 15-Plus Consecutive Years’ to [you].”

In response, an obviously delighted Kimmel could only say, “Wow!” and “Thank you.”