The Free Press, It Doesn't Come For Free 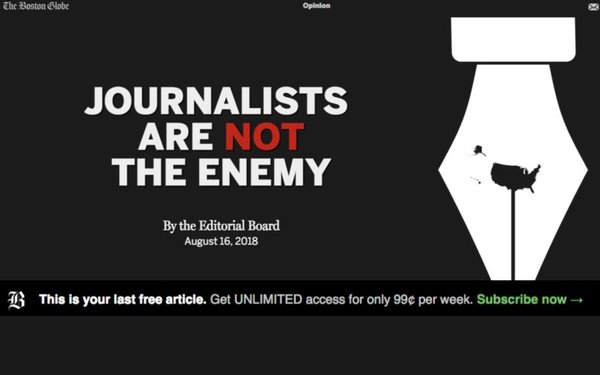 Today, thanks to an initiative organized by The Boston Globe, hundreds of news organizations are publishing what likely is a first-of-its-kind “coordinated editorial” calling on Americans to protect the “free” press.

If you read only one, read The Boston Globe’s, and if you’re not already a subscriber, you will notice something ironic when you click this link. The free press does not come for free.

“This is your last free article,” reads a statement at the bottom of the page. “Get unlimited access for only 99 cents per week.”

When our founders created our Bill of Rights, they made the First Amendment first, because they understood how important the free press is for a functioning democracy. They did not say how to pay for it.

That’s where you come in.

If you’re reading this, you’re likely part of the media economy that keeps the press “free,” even if it means you have to pay for it personally by subscribing to it. If you’re an advertiser or an agency who spends money advertising or sponsoring “native” content, you can do your part by using your budgets to help keep the press free.

Not just because it’s good business, but because it will help keep American democracy in business.

Call it “corporate social responsibility.” Call it “goodwill.” Heck, call it philanthropy if you want, but to the extent that you can make decisions with your marketing budgets that help underwrite journalism, there is no more important time to do that than now.

Yes, the press is under attack from an administration trying to label it as “the enemy of the people,” slandering it as “fake news” and trying to marginalize the role journalism plays in keeping us informed —  in order to keep our government honest. But the truth is that the news media has been under an economic attack long before this Presidency.

As a trade publication that covers the economics of media, we have had a unique front-row seat reporting on an industrial revolution, because the industry being revolutionized is the one we happen to work in.

It’s no secret that the economics of “digital transformation” have decimated news organizations by converting “analog dollars into digital dimes.” It has eroded business models that depended on analog gatekeepers -- printing presses, newsstands and circulation departments. They have been replaced by digital ones that effectively diluted the economic value of news media the second they “print” their news.

For the past several years, MediaPost has collaborated with the Wharton School of the University of Pennsylvania and media journalist Bob Garfield on a series of projects to study and to discuss how the shifting economics of media are impacting publishers, especially journalists.

Ironically, much of those discussions, especially our annual Media Future Summit, have been 100% off-the-record, and even MediaPost’s editorial staff have been forbidden from covering it specifically. But we can tell you it has explored every conceivable business model for sustaining the future of journalism -- everything from traditional ones like “advertising” and “circulation” to newer ones, such as “native,” “commerce,” and even news publishers selling their subscribers’ data.

So far, there has been no magic bullet, no single model that has emerged to sustain the economics of pure-play journalism other than people feeling they should pay for it. However you do it, and whatever you call it -- altruism, philanthropy, good business, ROI -- figure out a way to do so, because without a free press, it will be difficult for us to remain a free society.

As industry guru Shelly Palmer once quipped while emceeing a MediaPost conference: “I pay, you pay, or somebody else pays. But somebody has to pay for media.”