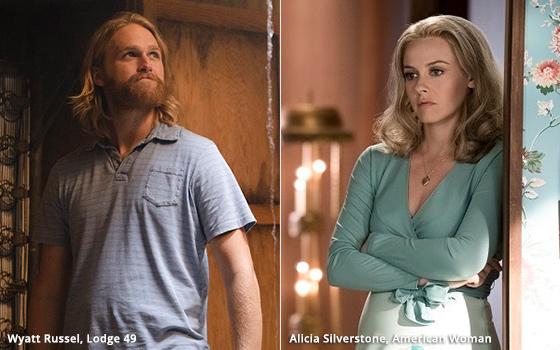 There were fewer summer premieres than in the last few previous summers, or so it seemed.

From a journalist’s point of view, there was less new-show promotion this summer, resulting in a noticeable reduction in the promotional noise level (and by extension, a greater degree of challenge when it came to devising daily column topics).

Still, there were some notable debuts, reflected in the positive reviews that some shows received here.

The most conspicuous of these was the quirky southern California drama "Lodge 49" on AMC. The show was so well-received by the TV Blog that it emerged as the best new show of the whole year, and not just the summer.

Another show -- this one about the southern California lifestyle of the 1970s -- was the best new show of the year until "Lodge 49" came along. This one was "American Woman" on Paramount, starring Alicia Silverstone. "American Woman" was great.

Speaking of Americans this summer on TV, "The Americans" ended its run on FX, and the Miss America Pageant made headlines when its organizers announced the pageant would no longer be interested in judging the beauty of its contestants. Translation: No more swimsuits -- and in the middle of summer too!

Other new shows introduced in the summer season (which started in late May/early June before the onset of actual summer on June 21) ranged widely.

They included "Seatbelt Psychic," the Lifetime reality show about a cab driver who sees dead people, and "Who is America?," the Sacha Baron Cohen ambush comedy show on Showtime.

The former was not the worst reality show ever introduced in the summer (how’s that for praise?).

And the latter felt funny at first, but upon reflection seemed like a mean, dishonest way to get people to say embarrassing things -- namely, to deceive them into doing interviews.

The TV Blog did not care for the new Kevin Costner contemporary Western series "Yellowstone" on Paramount, but it became a hit anyway. It was subsequently renewed for a second season.

You might say the summer season began with Roseanne Barr’s Twitter implosion that resulted in her losing her old show. which had just been revived.

That news led to the creation of "The Conners," the new version of her old show in which she would not appear but her entire TV family would remain intact. Whether or not this scheme will work will not be known until fall.

As the summer wore on, other personalities from the TV biz made headlines in a variety of ways, including CBS Chairman Les Moonves, who became entangled in a sex harassment scandal.

And Omarosa, the reality TV star from hell, went on a book tour to complain about Trump, the man who made her famous in the first place.

The saddest TV news of the summer was the suicide of Anthony Bourdain. This tragedy might never be fully explained.

Oprah Winfrey became the subject of a museum exhibit in Washington. Perhaps this serves as a symbol for her kind of television: She’s a museum subject now, and her era of true greatness is history.

But at the same time, this exhibition reminds us that Oprah and her era are well worth remembering.