'Dr. Pimple Popper' And The Seinfeldization Of America 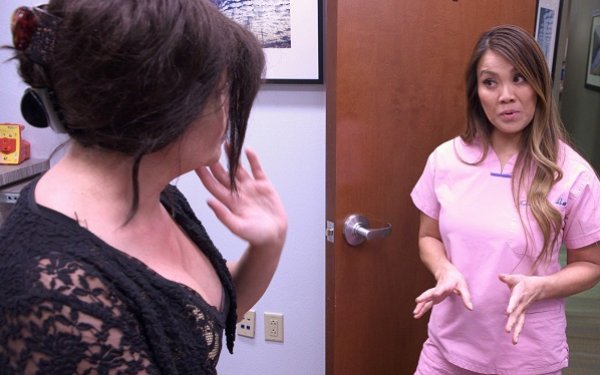 When "The Sopranos" came to prominence on HBO back in the ’00s, it soon became apparent that the show resonated with psychotherapists.

They loved the show's central premise, which was: Mafia boss suffering anxiety attacks goes to see a shrink.

Now comes word that the nation's community of dermatologists have a soft spot in their hearts for a "Seinfeld" episode about their profession. In fact, the name of a current medical reality show on TLC, "Dr. Pimple Popper," was inspired by that very episode.

The episode was titled "The Slicer." It first aired in November 1997, in the ninth and final season of "Seinfeld."

The episode had to do with Kramer's obsession for a deli meat slicer, but much of the episode evolved into a series of plot lines having to do with skin conditions and the doctors who treat them.

Jerry blatantly disrespected her profession, and labeled the doctor "Pimple Popper M.D." The tables were turned, however, when she and Jerry met one of her former patients, who thanked her for saving his life when she treated him for skin cancer.

It turns out that the central figure in the TLC reality show, Dr. Sandra Lee, was inspired to name her show "Dr. Pimple Popper" by the "Seinfeld" episode.

"It's sort of tongue-in-cheek and pays homage to the 'Seinfeld' episode that many of us dermatologists feel a little connection to," Lee said in an interview with an entertainment Web site.

"[Jerry] Seinfeld was dating a woman who said she was a doctor, but when he found out she was 'just' a dermatologist, he thought less of her ... Seinfeld called her 'Pimple Popper M.D.' So it's a subtle reference to this," Lee said.

“Dr. Pimple Popper” has been airing Wednesday nights on TLC this summer since July 11. In the show, Dr. Lee is seen treating various skin conditions. Not surprisingly for TLC, the show features some scenes of graphic medical procedures.

The show is apparently doing well enough to continue. TLC announced on August 14 that "Dr. Pimple Popper" has been renewed for a second season that will likely start next January.

More generally, the emergence of this show's title this summer provides another example of how "Seinfeld" continues to weave its way in and out of our popular culture.

Last May marked the 20th anniversary of the show's high-rated finale in 1998. Despite all the time that has gone by since then, the show is still ubiquitous in rerun syndication and references to it continue to pop up more or less constantly.

Just last weekend, the lifestyle section of The Wall Street Journal called "Off Duty" featured a large photo of Elaine Benes (Julia Louis-Dreyfus) to illustrate a story about how to wear large earrings.

The photo was at least 25 years old, but "Seinfeld," like Elaine’s earrings, seems like it will never go out of style.