Ad-Supported Tier Of CBS All Access Launches On Amazon Channels 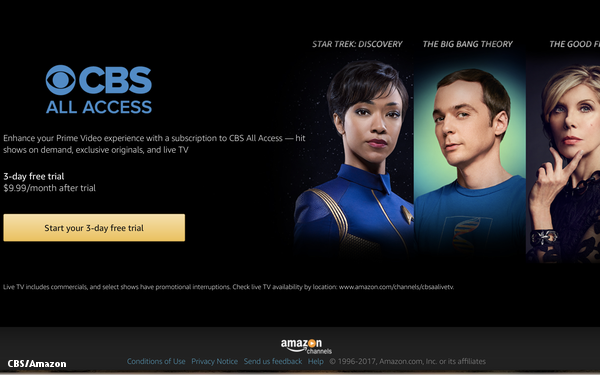 The advertising-supported tier of CBS’ streaming service CBS All Access has launched on the Amazon Channels marketplace.

In January, Amazon Channels launched the ad-free version of the service, offering it to subscribers for $9.99 per month. The ad-supported version comes in at a more accessible $5.99 per month, and includes pre- and mid-roll ads in its on-demand programming.

Both versions of the service include standard ad breaks in its live programming.

While CBS All access has only been available on Amazon Channels for seven months or so, the broadcaster has credited the technology company with supercharging its subscription growth. With its wealth of data, Amazon has been using its Amazon Channels platform to drive subscriptions to various OTT services, including All Access.

On the last quarterly earnings call, CBS CEO Les Moonves said that Amazon was “absolutely amazing in terms of growing our subs.”

“I would say we get more [subscribers] through them than with any of our partners,” he added.

Presumably the lower-cost ad-supported tier will only help that growth even further.

The launch is also notable in that Amazon Channels has, thus far, mostly relied on ad-free streaming services to bolster its lineup of premium subscriptions. The ad-supported tier of CBS All Access is the most high-profile ad-supported channel to become available this far.