44 Years Later, The Medium Is An Even More Powerful Message 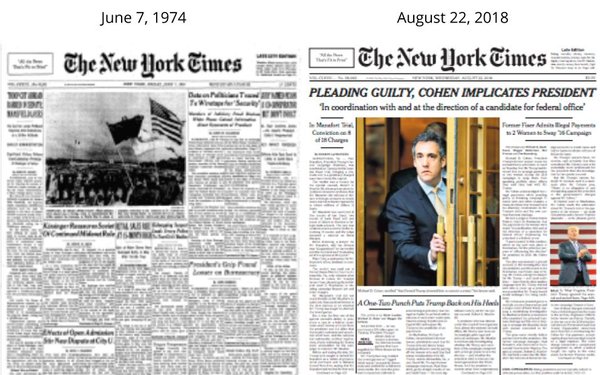 In this era of virtually unlimited feeds of digital news and information -- both fake and real -- I’d like to suggest you step back and process the story of the day the old-fashioned way: in print. Or at least, in a digitized form of print: PDFs of the front page of a June 7, 1974 edition and today’s edition of the front page of The New York Times.

Both editions covered similar stories -- a sitting President of the United States being named an unindicted co-conspirator in a federal crime -- but the circumstances surrounding them, and the way the Times played them, are very different.

Using the the paper’s aptly named historic archives -- the “TimesMachine” -- you’ll see the paper played the news surrounding President Nixon as the right-hand lead story in what was then an eight-column front page. Today, the paper played Trump’s involvement in personal attorney Michael Cohen’s guilty plea as a banner across all six columns of its current front page.

When Nixon was explicitly implicated in the Watergate cover-up it was new territory for a major national newspaper to cover news about a sitting President’s involvement in a federal crime. Forty-four years later, the memory of Watergate has been ingrained in our collective consciousness and has hung over the Trump Administration, at least since Robert Mueller was named Special Counsel to investigate the Trump Campaign’s role in Russia’s interference in the 2016 Presidential election.

I’m not going to use today’s column to comment on the nature of those crimes, the legal merits or the politics. I’m just weighing in on a media experience of it and suggesting that if you simply filter the news from the vantage point of one of the most highly curated media experiences you can still experience -- the front page of the print edition of The New York Times -- you’ll get the message.

A picture may be worth a thousand words, but when the picture is a four-color one on the front page of The New York Times showing the President’s personal attorney leaving a courthouse after pleading guilty and testifying that he was directed by the President to pay hush money to two women during the 2016 campaign to keep them from speaking publicly about affairs they said they had with him, it’s got to be worth something more than that. 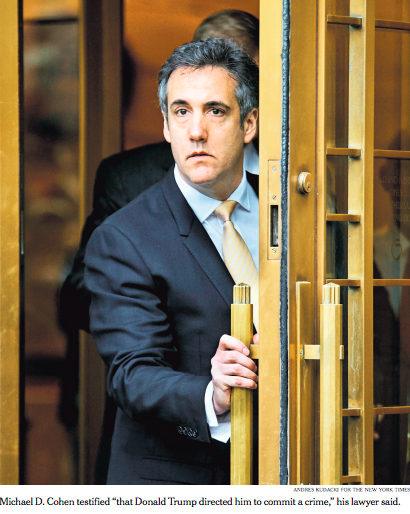 news, newspapers, politics
7 comments about "44 Years Later, The Medium Is An Even More Powerful Message".
Check to receive email when comments are posted.
Read more comments >
Next story loading