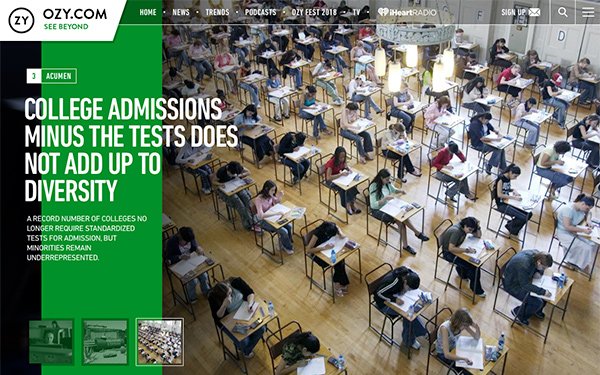 Last month, digital news outlet Ozy Media announced United Talent Agency would represent it across TV, podcasts and live events. The news came just a week after the outlet announced the creation of an in-house production studio called Ozy Studios, which will expand its video offerings and create robust branded content for its advertisers.

Along with the studio’s launch, Ozy Media will double the size of its video team.

TV veteran Royd Chung, who was previously executive producer on Netflix’s "Girls Incarcerated" documentary and a supervising producer for Barack Obama’s video team during the 2012 election, was tapped to head the studio.

“It’s super interesting,” Joe Lazauskas, head of content, Contently, said. “Some publishers are realizing a third path [as they “pivot to video”], becoming a Hollywood-style studio that can sell shows into platforms like Netflix, Hulu, and Prime.

"As TV becomes increasingly debundled from the cable system, we’re going to see more and more publishers and brands investing in OTT programming and reaching mass audiences through streaming platforms.”

The production studio’s creation follows Ozy Media’s success with three TV series: "Third Rail with OZY," "The Contenders - 16 for '16" and "Breaking Big," which aired on PBS and globally via Facebook Watch and the BBC.

Chung told Publishing Insider: “The goal is for video to become OZY's first language. All three of our TV series were text pieces that translated beautifully into video. We will definitely have more of that, but also continue to find compelling video first content that you won't find anywhere else.”

Since Ozy’s first round of TV shows debuted, the company has been getting requests for scripted and unscripted TV series, in addition to digital and series and branded content. Currently, Ozy Media has six TV series in development.

Ozy Studios is also taking on more branded content from advertisers. Two upcoming branded projects include a series for Volvo called "The Professionals" and another for Ally called "More of What You Love."

The new studio creates an interesting space where Ozy Media can continue to drive its vision through long-form video content, while also working loosely with advertisers, imaging ways to create a deeper connection with audiences.

“Our average viewers are young and globally-minded. They come to OZY because they want to be ahead of the curve,” Chung said. “We're experimenting with how exactly that translates to video over the next few months. We'll also be able to produce more robust and intricate video series and specials for our digital platforms.”