Whimiy Lets Neighbors Profit From Renting Out Tools, Other Stuff 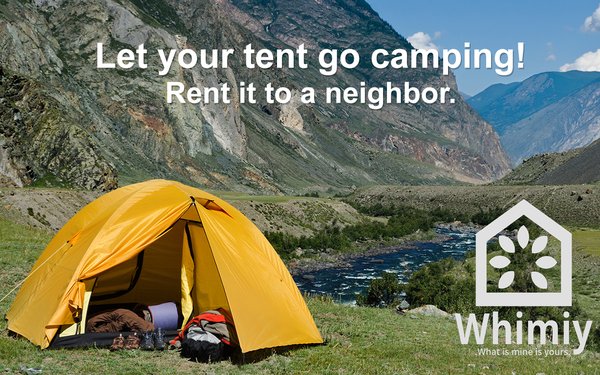 The neighbor borrowing the cup of sugar is a familiar comic-strip image, dating back to the times neighbors baked, or used sugar -- or read the newspaper funny pages.

Now a new website called Whimiy is using its social media platform to let neighbors rent items out to other neighbors nearby, at rates and terms the renter sets.

Whimiy takes a 10% cut off the top and pledges to donate 5% of net proceeds to environmental nonprofits.

Philosophically, Whimiy is close to Uber and Airbnb, darlings of the sharing economy, and uses ideas that also make the neighborly Nextdoor.com work.

“With Whimiy, your clutter becomes your inventory. Your storage unit becomes your warehouse,” Rhonda Harper, the CEO and founder, says in a statement.

Owners of goods can offer them to others who live in an eight-mile radius that Whimiy works out, and only users in that area are part of that marketplace.

Getting people to rent out their power washer to a guy a few blocks away might find eager clients on either end of the equation.

So far Whimiy has posted some invitational images on Instagram — but as far as other marketing goes, Harper tells Marketing Daily that’s limited  to “providing social images for [members] to share,” and having new members “share friend, family, colleague and neighbor contact info with us.”

Nextdoor has a slightly different model, with household goods for sale, not rent, along with tips on good plumbers and alerts about scam artists, in particular neighborhoods. Its FAQ says that it works best in neighborhoods with between 750-1,000 households. Since 2011, it says it has created 100,000 neighborhoods and 10 million members.

These are early days. Whimiy has only been in beta testing for a couple months in Dallas ,and just last week went national.

Harper, who owns 100% of the company, cites stats about the sharing economy from PricewaterhouseCoopers that shows 83% of people say sharing makes life “more convenient and efficient” and 86% say it makes life more affordable.

Logically, Whimiy should work as easily as eBay does for more permanent transfers of goods. But the New York City apartment dweller Adam Berk, who  founded a similar service in 2006, had a sobering experience.

“My sharing economy startup, Neigh*borrow, was an obvious idea,” he wrote for Pando.com in 2013.  “There were hundreds of doodads in my apartment that I only used once in awhile -- wrenches, power drill, vacuum, vegetable peeler, and camera. My building held 300 units whose occupants I figured were in similar straits. And my New York City neighborhood had 20 such buildings, all within a short walk.”

It was such a good idea, in fact,  CNBC quickly touted the site on the air. For many reasons — some of which Berk blames on early, bad decisions — Neigh*borrow (with the slogan, “Because owning shit you hardly use is dumb”) has never made it big.

“Journalists flocked to write about us, but they never signed up for the service… Even the users who wrote us emails saying how we were awesome (I got emails like that every week) didn’t make an effort to lead their communities to Neigh*borrow. We were great in theory but not in practice,” he wrote.

Berk did not respond to Marketing Daily’s request for a comment about Whimiy.