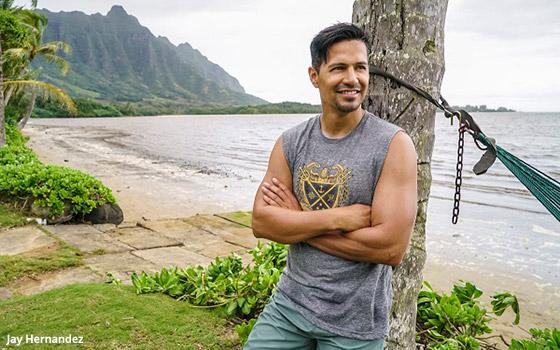 As a concept for a new TV show, it is reasonable to perceive the new “Magnum P.I.” on CBS as long in the tooth, old hat, yesterday’s news or just plain stale.

Perhaps to counteract this perception, the new Thomas Magnum (played by Jay Hernandez) does not lack for energy.

In the pilot for this “Magnum” remake, which premieres next Monday night, he is seen extracting an entire family from North Korea while under fire from DPRK troops, taking a brutal beating from two thugs that would have killed a normal person, scuba diving to a shipwreck and finding a cache of stolen gold bars, wrecking two Ferraris in encounters with bad guys, and leaping onto a helicopter undercarriage from a fast-moving car (one of the Ferraris).

He does all this, and more, in roughly 44 minutes. The fast pace of all this action -- ludicrous as much of it is -- seems intended to grab audiences by their figurative lapels and shake them into believing this is not their grandfather's “Magnum.”

Or at the very least, this Magnum is not their grandfather. As the title character once played so handsomely by Tom Selleck, Hernandez applies just the right amount of charm and masculinity to the role.

And in this case, “just the right amount” is about a ton and a half. He is a ladies man, a special ops war hero and ex-POW, a loyal friend, a gifted private investigator, and a macho man who is nevertheless capable of consideration for other people’s feelings and heartfelt sympathy for their personal losses.

In these ways, he is yet another in a very long line of CBS supermen and superwomen -- geniuses, infallible charmers and rugged fist-fighters who always end up on the winning side of any conflict.

In the new “Magnum,” he is aided by two former Navy SEALs with whom he was imprisoned in Afghanistan and a young woman who works for the mysterious author of Navy SEAL thrillers who has allowed Magnum to live in his guest house.

The woman, Juliet Higgins, is the replacement for the old Higgins, who was played so memorably by John Hillerman on the old “Magnum.”

The woman is played by Perdita Weeks, younger sister of the great Honeysuckle Weeks, who possesses one of the most memorable names in show business and who became internationally famous on one of the best TV shows ever imported from the United Kingdom, “Foyle's War.”

In one of the more far-fetched sequences in the premiere episode of the new “Magnum,” petite Perdita takes on two ex-Marine bad guys with kicks and karate chops, even after she is shot in an upper arm.

You are expected to accept this ridiculous mismatch as readily as you are supposed to believe that Magnum -- even after receiving at least two beatdowns in this episode -- is capable of leaping onto a helicopter and blithely hanging there by his fingertips until his ex-SEAL friends can pull him up into the cockpit.

It's all in day's work (or maybe less than an hour's work) for this CBS stalwart. The funny thing is: This new version of this very old show should have about an ice cube's chance in Hell of succeeding, but it will probably be a hit anyway.