New For Fall: 'Manifest's' Destiny Could Be Success For NBC 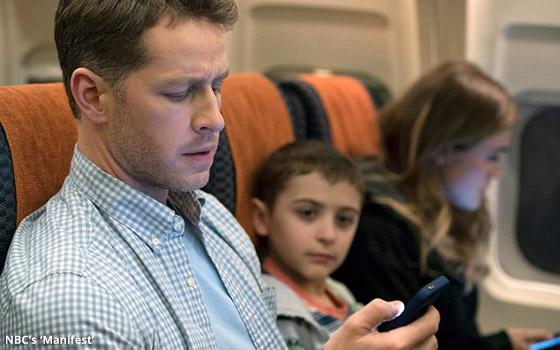 At first glance, it is just another farfetched idea for a TV show: An airplane full of passengers hits some very sudden, rough turbulence and, Voila!, when they land in New York a few minutes later, they learn that five years have gone by.

The show's principal challenge is to make this kind of premise work. That does not necessarily mean explaining it fully or otherwise trying to make it believable or plausible (although this couldn't hurt).

It is really a matter of making the characters sympathetic and likable, and also involving the audience in their plight. The good news here is: The premiere episode succeeds at this, mainly because we, the audience, are learning what happened to these people at the same pace and at the same time that they are.

They are as befuddled as we are. They boarded a flight in the island of Jamaica on fictional Montego Airways in 2013, and when they landed, somewhat shaken up by that extreme turbulence interlude, it was November 2018.

Among other things, relatives died and spouses moved on. It is all a lot to absorb, and it becomes even more complicated when some of these returnees begin to develop powers of extrasensory perception.

Sure, that new wrinkle threatens to make an implausible situation even more difficult to accept, but I have to admit: I liked this show anyway. In the premiere episode, these new powers led to a very clever, uplifting plot twist.

The premiere reveals a number of clues and coincidences that could eventually help explain what is going on.

A Bible verse becomes a recurring motif -- Romans 8:28: “And we know that God causes all things to work together for good to those who love God, to those who are called according to His purpose” (New American Standard Bible version).

This is the kind of show that might have you searching for clues and coincidences that may or may not have anything to do with this show's storyline. You could start with the show's title, “Manifest,” which refers, of course, to the list of passengers on this flight.

But you might also append the word “destiny” to “Manifest” and conclude that these passengers might each be headed toward a manifest destiny of his or her own.

For this and other answers to many questions, I have a feeling a number of viewers are going to catch on to “Manifest” and stick with it for a while.

tv
4 comments about "New For Fall: 'Manifest's' Destiny Could Be Success For NBC".
Check to receive email when comments are posted.
Read more comments >
Next story loading