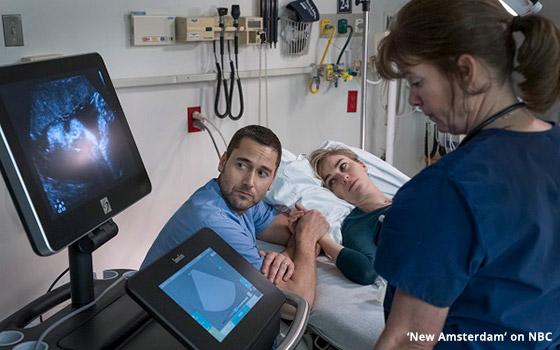 While watching the premiere episode of “New Amsterdam,” various thoughts occurred to me.

The star of that show was Nikolaj Coster-Waldau, who is now internationally famous as one of the stars of “Game of Thrones.” In the old “New Amsterdam,” he played a New York City homicide detective in the present day named John Amsterdam.

He also happened to be immortal, having lived 400 years ago in the Dutch city of New Amsterdam in the New World in the years before it became British and renamed New York. Yada yada yada -- this “New Amsterdam” lasted about six weeks and was never seen again.

Then I thought: What about Elvis Costello? Didn't he have a song called “New Amsterdam”? Right again -- this song was on his “Get Happy” album, released in 1980.

The song's lyrics include: “New Amsterdam, it's become much too much, till I have the possession of everything she touches, till I step on the brake to get out of her clutches, till I speak double Dutch to a real double duchess …” That Elvis -- he was a wizard of words in those days, wasn’t he?

This new TV series called “New Amsterdam,” premiering next Tuesday on NBC, has nothing to do with these other “New Amsterdams,” Nevertheless, the NBC “New Amsterdam” does cause the mind to wander.

Besides searching one's memory banks for the other “New Amsterdams,” this new one might also have you pondering the nature of television and its propensity for producing medical dramas that all begin to look the same after a while.

TV's top-of-the-line hospital shows are certainly well-made. But the doctor-protagonist who sallies forth into so many of the fictional hospitals on these shows with his brilliance, abrasive manner and unorthodox methods that fly in the face of these facilities’ entrenched bureaucracies has become a cliché.

In NBC's “New Amsterdam,” the title refers to the name of yet another fictional hospital. Filmed in and around the real-life Bellevue Hospital Center in Manhattan, New Amsterdam Medical Center purports to be the oldest public hospital in the United States. In reality, Bellevue itself lays claim to that designation.

In “New Amsterdam,” the crusading new medical director is played with all the earnestness the role requires by Ryan Eggold (seen in the photo above).

The premiere episode has this Super Doc jogging all the way to work from Brooklyn to the East 20s in Manhattan without seeming to break a sweat, speaking fluent Spanish to some of the hospital's nurses and janitorial staff, dealing with a suspected Ebola outbreak, firing a couple dozen long-time doctors and other employees at a meeting of the general staff, establishing a farmers market for promoting healthy eating habits in the hospital's lobby, and preventing his estranged wife (or girlfriend -- I am not sure which) from having a miscarriage -- all on his first day on the job.

The whole thing is entirely unbelievable -- a TV show version of a hospital that bears almost no resemblance to a real one.

Of course, the new chief doctor is poised to do battle with the bureaucratic and financial considerations that guide so many medical decisions in our chaotic, broken healthcare system.

On TV shows like this one, the crusader is almost always seen as achieving some success in this effort from the very start, merely by applying the force of his personal charisma and assertiveness. In the real world, this would almost certainly never occur.

Not that there is anything wrong with a made-for-TV, fantasy hospital, but we have all seen so many of these (some of which are currently seen on other networks such as “The Resident” on Fox and “Chicago Med” on NBC, to name two of them) that this new one seems to be coming along at just the wrong time.