'Beyond ShippING' Spots Capture The Excitement (Or Not) Of UPS Store 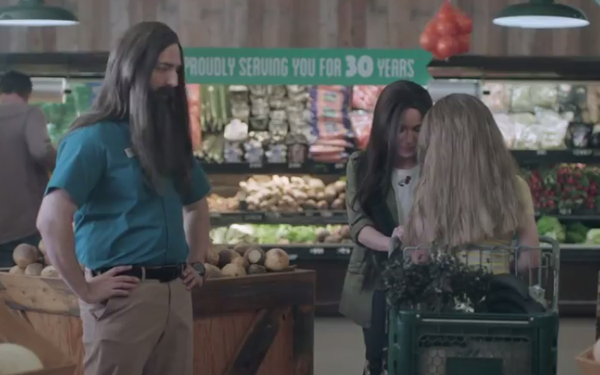 The UPS Stores have just launched a series of commercials aimed at letting consumers know that they can do a lot more at those places than just mail a package.

UPS is calling it the “Beyond ShippING” campaign, with a spot in which actors rattle off all those other “ing”  things -- printing, packing, shredding, notarizing, supplying, sizing, mailboxing  scanning and more -- that the 4,700 UPS Stores nationwide provide.

It might be a surprising list to some consumers. But, the commercials seem to acknowledge, it’s might be much more exciting to the store owner than everybody else.

At a supermarket, a mom and her toddler in shopping cart seat  run into Eric, an acquaintance wearing a UPS Store shirt.  The chit-chat seems to have run its course even before he points to the rutabaga sale sign and proudly tells her his shop printed it.

She politely tries to move away, but he persists with all the other “ings” his store does. Soon her face glazes over. At the end of the commercial, they’ve been there so long that Eric now has a beard — and her son, now with long hair, has grown several inches taller. From his kiddie seat, he tells his mom, awkwardly, “I can’t feel my legs.”

That commercial was created by Ogilvy.

The holiday season is around the corner -- a time The UPS Stores really draw a neighborhood crowd -- but these commercials are designed to attract small-business owners.

“We understand the challenges small-business owners face. They are looking for a resource they can rely on,” says Michelle Van Slyke, senior vice president of sales and marketing, in a statement. “With our new campaign, we put it all out there.”

In other commercials, a UPS Store employee torpedoes  a series of her first dates with her recitation of UPS Stores’ services; a partygoer is victimized by a UPS Store clerk who engages him in guest-who-wouldn’t-leave-type conversation; another store clerk pesters a rider at the rodeo, and a clerk ambushes her seatmate on a twisty-turny roller coaster as it inches to the top.

“We wanted to make our UPS people endearing and fiercely proud of the services they provide,” Van Slyke tells Marketing Daily. “They can’t stop talking about it.”

UPS realized that many consumers don’t know much about what goes on inside those stores, typically located in strip malls.

Van Slyke says, “Then we did a kind of research we never did before. For a focus group, we invited in what we call our ‘raving fans,’ people who use us a lot, and just had them talk about all the services they use. And in the other room, we had people who don’t use us.  They said, ‘Oh my god, I can’t believe you can do all this at a UPS Store.’ That was a big ah-hah moment for us.”

UPS also determined to use the simple language those customers used to describe services, not the industry argot. At the end, Van Slyke had the now converted non-customers write a letter as if they were the UPS Store owner explaining all the reasons to go there. From that, the “OfferINGs campaign” was born.