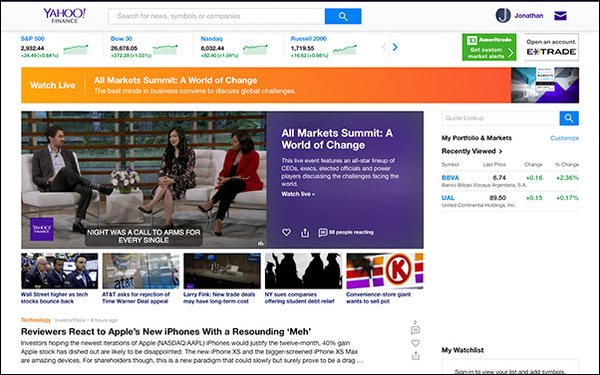 Yahoo Finance is creating two new positions to expand its live events and video programming offerings, following a year of growth and investment in the division.

CBS’ Lulu Chiang is heading to Yahoo Finance as senior executive producer of live events. She will help scale the Yahoo Finance "All Markets Summit" event franchise, the latest one held in New York City today.

Adam Shapiro, a correspondent at Fox News and Fox Business, will become an anchor at Yahoo Finance.

“He will work with some of our other producers to think about what the programs will look like to make sure they are unique and different in the marketplace,” Joanna Lambert, general manager of finance and tech at Oath, told Publishers Daily. She oversees the Yahoo Finance, TechCrunch and Engadget brands.

Chiang and Shapiro and a few other recent hires join Yahoo Finance as it “continues to upgrade our coverage and our programming,” Lambert said.

Those programs all run under 30 minutes, but the goal is to continue to build up the vertical's live programming to provide bell-to-bell coverage of live market and global financial news updates by the end of this year.

The programs are available on Yahoo Finance’s owned-and-operated platforms, such as its website and app. Segments of the programs are distributed on social platforms. The company is looking at off network distribution options, too.

The number of streamed events has tripled year-over-year, generating over 120 million streams of the events. One of Chiang’s responsibilities will be to expand live events beyond the United States to Europe and Asia.

The events bring “big names in finance and politics to have these fantastic discussions. They bring our audience closer to what is happening in business, in the markets and in politics,” Lambert said.

Yahoo Finance landed partnerships from companies like Ford Motor Company, Starbucks and JPM Chase for the events. Fidelity “is a long time sponsor” of the “Final Round” show, Lambert added. The company is also in talks for brands to sponsor charts, segments and polls featured in the videos.

“We want our program to be interactive. Because we are a digital-first company, we have an advantage. We have those tools to be more interactive with our audience,” Lambert said. Yahoo Finance has seen growth across its other platforms, too. It has 75 million unique monthly users across platforms, mostly retail investors “who are really interested in what’s happening in the market.”

The brand has seen about 60% year-over-year growth on mobile.

Video content has expanded significantly in the last year, from 60 minutes of live content to four hours each business day. The app features more personalization, as well as a new notifications feature that briefs users on content relevant to what they are tracking on the app.

“Giving people the content they want -- and making it easier for them to discover more on that topic if they want-- is the biggest driver of growth for monthly and daily active users,” Lambert said.