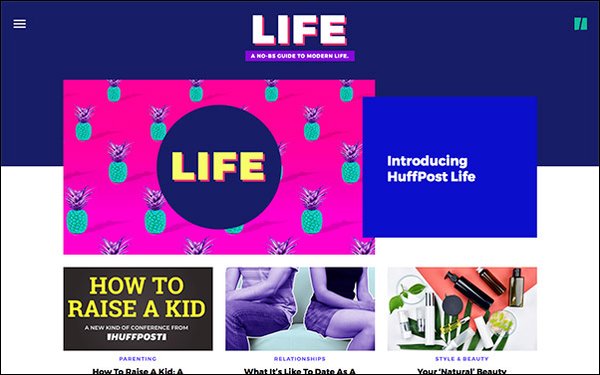 HuffPost has unveiled a redesigned lifestyle section called HuffPost Life, with a new editorial mission to give a “no-B.S. guide to modern life.”

“Lifestyle sites tend to suck,” HuffPost editor-in-chief Lydia Polgreen wrote in a post about the new site. “They can make you feel terrible about yourself, telling you that you are too fat, not rich enough and not cool enough. They tell you that the key to happiness is buying more stuff you don’t need and can’t afford. They traffic in telling people — usually women — how to be more like anyone but themselves.”

She made a small dig at Gwyneth Paltrow’s often-targeted lifestyle site, Goop: “You won’t find us hawking any pricey vaginal eggs here.”

HuffPost Life, with its bold colors and imagery, has a new section on money to cover personal finance, saving, real estate and money management. Another new section, called “Work/Life,” will explore the modern work-life balance.

“For us, this is a real opportunity to create a space to work with brands in an environment where they can make choices about where to shop, eat, be a better parent that’s separate and apart from the news,” Polgreen told Adweek.

The new site also includes an original illustration series on modern relationships, an interview series with leaders and trendsetters on how they handle the stress of modern careers and busy lives, and “Aging in America,” an editorial series on aging through the lenses of money, sex and mental health.

Spring boarding off the new vertical, HuffPost will hold its inaugural parenting conference, “How To Raise A Kid,” on November 2. It aims to bridge the gap between parents and experts like psychologists, educators and children’s book authors.

Separately, Davler Media Group’s City Guide is adding a section devoted to Brooklyn in both its print and online offerings.

“We are now expanding and housing our coverage in a special section dedicated to the borough’s many offerings, from its museums and music venues to its dynamic retail and restaurants,” stated Ethan Wolff, editor of City Guide. “We think it will be a boon not only for tourists and culture-minded locals, but Brooklyn businesses that want to narrow-target the tourist market.”

Beginning in November, each weekly issue of City Guide magazine will feature an eight-to-10 page section dedicated to Brooklyn tourism and culture. A new hub is also being added to City Guide’s site, CityGuideNY.com.

“Over the past decade, Brooklyn has become a global brand that powers so many trends and so much of our pop culture,” Wolff stated. In the same period, he notes the construction of over 60 new hotels and visitor spending that exceeds $2 billion annually.

City Guide magazine is distributed in over 400 hotels and 100 tourist destinations across New York City, with a 60,000 weekly circulation reaching 3 million visitors annually.