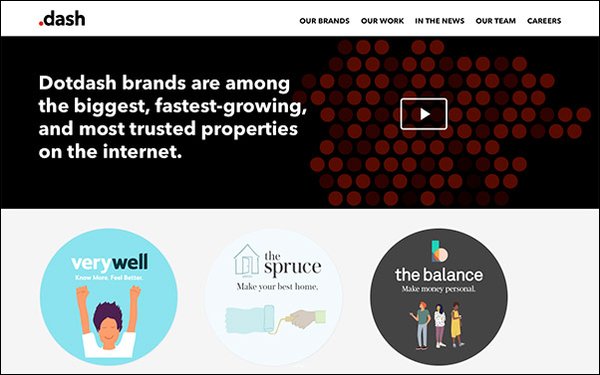 Dotdash has spent $45 million to rebrand from About.com; it expects to be profitable this year.

According to Axios, which first reported the news, Dotdash also expects to bring more than $100 million in revenue in 2018.

In 2017, About.com, the nearly 20-year-old site known for its “how to” articles, broke apart its massive, general-interest content into six brands: Verywell, The Balance, Lifewire, Investopedia, The Spruce and TripSavvy.

Neil Vogel, CEO of Dotdash, told Publishers Dailylast May that Dotdash will serve as a big publishing media company, such as Condé Nast or Hearst.

“We split the company up like a branded premium publisher,” he said. “Our thesis that consumers prefer endemic brands rather than general brands ... was totally right.”

Vogel said the name Dotdash is “a nod” to About.com’s history. The red dot in the logo has been a part of the site’s identity from inception, while the dash “suggests forward motion and action.”

Last year, Dotdash reported ad revenue was up 40%, amounting to more than $20 million in the fourth quarter 2017.

Dotdash spent some of that $45 million on updating articles with new information and original photography and video, sources told Axios.

About $20 million is being spent this year alone. It increased its spend by 30% to overhaul content this year, compared to 2017.

The media company also cleaned out its archives, going from about 1.4 million pieces of content to fewer than 300,000 across its portfolio of brands, Axios reports.