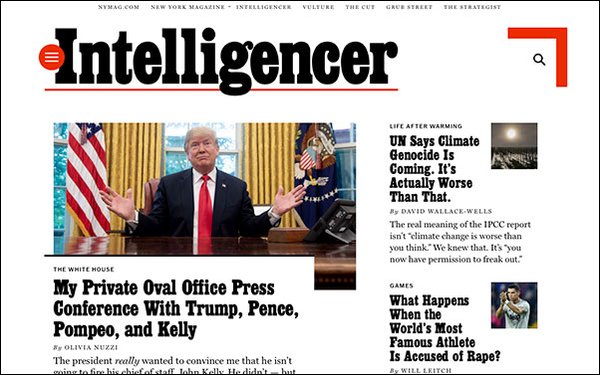 The new vertical is built off of Daily Intelligencer’s site, with a new URL.

“Intelligencer brings together the smartest writers on everything from climate change to technology’s impact on our lives, with a homepage we aim to make a destination,” stated New York editor-in-chief Adam Moss. “Readers can come to understand the narrative of the day, but also delve into big ideas.”

The site’s homepage curates “the best and most thoughtful commentary from around the web,” stated parent company New York Media.

A note from the Intelligencer's editors on the site explains the thinking behind the homepage:

“Inspired by the Slack channel where Intelligencer staff discuss the news all day long, and by the social-media feeds through which so many Americans now find information, it’s intended to be a constantly updated curation of not just the stories we’re writing, but also the most useful reporting, commentary, comments, tweets, photos, and other ephemera from around the internet."

Intelligencer's homepage will also feature a "quick chat component," where its writers and editors converse about the day’s events.

"We’re going to lift the curtain on our edit meetings and publish a few staff chats every week. And we’ll give our readers more exposure, too, by featuring your smartest comments," the note reads.

Scott Rudin Productions is Intelligencer’s launch sponsor. New York Media says there are upcoming campaigns from premium TV and technology brands in the works, too.

They will be joined by business columnist Josh Barro from Business Insider, race and identity reporter Zak Cheney-Rice from Mic and progressive politics and policy reporter Sarah Jones from The New Republic.

Intelligencer is also launching a limited-run podcast called “2038,” to explore what life will look like 20 years from now.

Each episode will explore a different vision — from flying driverless cars to a Chinese world order — featuring experts across industries like business, technology and climate science discussing their theories with editors Max Read and David Wallace-Wells.