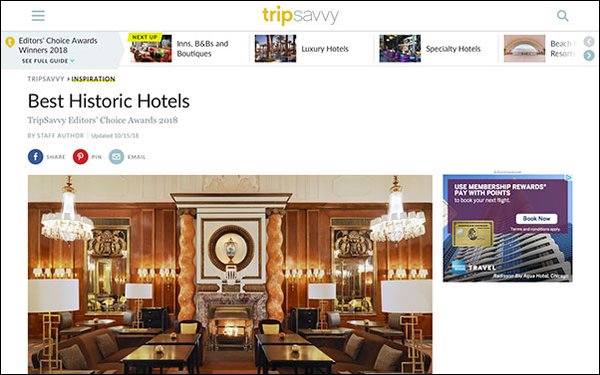 It is the first awards program for Dotdash, the rebranded About.com, the nearly 20-year-old site known for its “how to” articles.

The company is exploring creating similar awards with its other brands, which include Verywell, The Balance, Lifewire, Investopedia, The Spruce and ThoughtCo.

More than 60,000 businesses across the world were reviewed for the 2018 TripSavvy awards, chosen for their service and customer experience.

The Editors’ Choice Awards are presented in a winner’s section on the TripSavvy site. They are divided into three categories: Food & Drink, Attractions and Hotels.

“Because vacation priorities vary for everyone, we chose not to rank businesses against one another. Instead, we are recognizing any place that meets our criteria,” TripSavvy general manager Molly Fergus and senior editor Elspeth Velten wrote on the site.

TripSavvy’s travel editors made the final call on the selections. About 2% (around 1,400) of those businesses passed TripSavvy’s editors’ testing and standards.

“It’s easy to waste vacation time trying to figure out where to go next,” stated Fergus. “So we coupled our own internal contextual data with insights from real-life travelers and experienced editors.”

TripSavvy’s data team used machine-learning technology to find businesses from data across the web, including Internet reviews and audience metrics from the site. The team matched these against TripSavvy’s content (30,000 travel advice articles) to identify the businesses and tourist destinations that outranked competitors in quality, customer service and value.

TripSavvy’s team of editors and writers then examined the results, highlighting “the most special, noteworthy and trustworthy businesses,” per the company.

TripSavvy claims to attract more than 6 million readers each month.