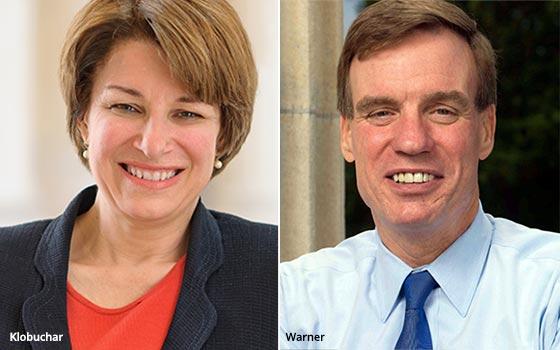 A recent Facebook initiative aimed at combating foreign interference in elections involves requiring political-ad purchasers to identify themselves in “paid for by” disclaimers.

But Facebook's system suffers from some “significant apparent loopholes,” including one that allows ad purchasers to lie about their identities, Senate Democrats Amy Klobuchar (Minnesota) and Mark Warner (Virginia) say in a new letter to CEO Mark Zuckerberg.

“The fact Facebook’s new security tools allow users to intentionally misidentify who placed political ads is unacceptable,” the lawmakers write. “Free and fair elections require both transparency and accountability which give the public a right to know the true sources of funding for political advertisements in order to make informed political choices and hold elected officials accountable. However, it is clear that there are significant loopholes with regard to how Facebook sells ads and the process by which disclaimers are applied to political ads.”

Their letter comes several days after Vice reported that its staff was able to purchase fake ads in the names of all 100 U.S. Senators. “All 100 sailed through the system, indicating that just about anyone can buy an ad identified as 'Paid for by' by a major U.S. politician,” Vicewrote. “These tests show that compliance with the feature is entirely voluntary, meaning a tool that Facebook introduced to increase trust in advertising can also be used as a vector for misinformation, and another way bad actors can game Facebook’s platform.”

Two weeks ago, The New York Times also reported that people could get around Facebook's new transparency rules.

The lawmakers are asking Zuckerberg to “take every step necessary to close these loopholes.”

Rob Leathern, director of product management at Facebook, says the company investigates and removes deceptive ads after being informed about them. “We’re exploring additional checks to help prevent abuse and will respond to requests from law enforcement and election officials now and in the future if new requirements arise,” he said in an emailed statement.

Facebook said earlier this year that it supports passage of the Honest Ads Act -- a bill introduced by Warner and Klobuchar. It would require digital platforms with at least 50 million monthly viewers to maintain publicly available copies of political ads purchased by groups spending more than a total of $500. The web platforms also would have to maintain public records about the target audience, number of views, rates charged, and dates and times of publication.

The lawmakers unveiled the proposed bill after it emerged that Russian operatives used Facebook's platform to spread propaganda during the last presidential election. At least 3,000 ads linked to Russian accounts ran during the 2016 election cycle; those ads may have reached at least 146 million Facebook and Instagram users.